Is football dangerous and demoralising? Well, there’s a question.

Dangerous in what way? Demoralising because … ? Maybe the Sports Journalists’ Association should conduct a public forum on the matter. Or maybe not. Even if football was deemed dangerous and demoralising, nobody in the game would wish to do anything about it. There’s far too much money at stake.

Back in the dim and distant, however, a sports journalist posed that very question. Nicholas Lane “Pa” Jackson, who edited Pastime, a 19th-century sporting weekly – for good measure, he also founded the Corinthians FC and served as assistant secretary of the Football Association – was responding, in part, to a man of the cloth who felt that aspects of Association Football were “a great and growing evil”.

Jackson was giving an interview in the March 23, 1889 edition of Pall Mall Gazette, and we have to thank a modern football writer for bringing his words to our attention. Paul Brown, who has written about football for The Guardian, FourFourTwo, When Saturday Comes and Loaded, has produced a second volume of Goal-Post, an anthology of Victorian football writing.

This second volume contains articles by 21 Victorian football writers, some well-known, some less so. Highlights include CB Fry on football versus cricket, pieces on the difficulties in forming a club, arranging matches, and even travelling to games.

They provide a rare insight into the birth and development of the world’s favourite game.

“I.C.I.”, writing in the Graphic in February 1886, took the view of Charles Dickens’s Jorrocks in regard to hunting when he felt that football was “ … the image of war without its guilt and with only five and twenty per cent of its danger”.

Back to Pa Jackson, the Pall Mall Gazette reporter found him “at work in his office, the walls of which are covered from floor to ceiling with photographs of famous players in groups”.

Jackson didn’t think that football deserved to be called dangerous. Well, no more dangerous than hockey, hunting or skating. And anyway, he argued, broken collarbones could be left out of the equation “as too trifling injuries to be worth mention”. 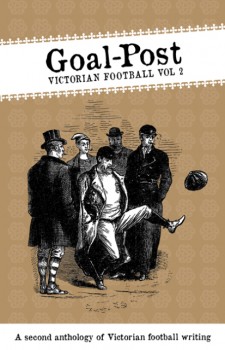 Jackson took exception to the previous Saturday’s Gazette in which a correspondent imaginatively by-lined “A Football Reporter” had complained that “unnecessary roughness” was creeping into football. The writer backed up his claim by providing a list of 14 serious injuries and eight fatalities that had occurred on football pitches the previous season.

Jackson, however, felt that the number of injuries was no worse than they had ever been and it was simply that “greater prominence has been given to these in newspapers”.

But it was the “Converted Enthusiast” – actually the Reverend CF Aked – who particularly got up Pa Jackson’s nose. The vicar had written that while football was “the very best game ever played”, rough conduct was becoming more widespread, gambling was a “great and growing evil” in the game, and drinking habits were “learnt and fastened upon young men as a result of their keen interest in football”.

Jackson reiterated his position on rough play, thought that there was nothing to justify the notion that football led to drinking, and argued that while men liked to gamble on all manner of games, there was little or no systemic betting on football and “certainly nothing of this sort in the south of England”.

This fascinating anthology reveals that while much in football has changed, plenty remains the same.