Was he actually any good? ERIC BROWN looks at the evidence assembled in Steve Tongue’s new book 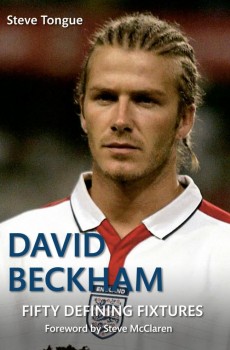 It is five years since he last played regular top-flight football in Europe, six since his last game for England, but the Beckham debate continues: Was he a genius with a right foot capable of threading a needle, or just an overrated one-trick pony ?

Was he really one of England’s greatest or a “Golden Generation” let-down responsible for the team’s exit from two World Cups ?

There are those who insist Beckham cloaked his teams in genius and those convinced he was nothing but an overpaid clothes horse employed mainly to sell football shirts.

Critics claim Beckham had no pace, couldn’t head the ball and couldn’t tackle. They said similar things about Bobby Moore, though, and he didn’t do too badly.

The facts cannot be disputed. You don’t win 115 England caps and become the first Englishman to scoop League titles in four different countries without having some talent.

In his latest book, veteran football journalist and broadcaster Steve Tongue concentrates on the facts and the football during his painstakingly researched review of Beckham’s long and colourful career. No kiss and tell revelations here – just an in-depth focus on 50 of the most important matches he played.

From his first tentative steps to notoriety in Manchester United’s under-16 side in 1991 to his final match for Paris St Germain v Brest in May 2013, Beckham’s career is put under the microscope.

Steve McLaren, a major influence at Manchester United and as England coach, sums it up neatly in a thoughtfully penned foreword. “David was one of what I call sport’s 5 per centers who reach the top of their profession not just through ability but with tremendous determination and mental strength. He was the hardest of workers; always wanting to improve.”

And improve Beckham did, until he was his country’s talisman and leader. Hours on the training field spent honing his dead-ball technique brought Champions League glory for United and World Cup final places that otherwise might have eluded England.

It didn’t all go to plan. Watched by a TV audience of 26 million, Beckham’s petulant kick at Argentina’s Diego Simeone in St Etienne earned a red card and saw England eliminated from the 1998 World Cup.
Many still blame him for elimination from the 2002 finals in Japan when his curious jump to avoid a tackle led to Brazil breaking to equalise when England led 1-0 and seemed set for the semis. Brazil won 2-1.

Beckham’s dead ball kicks remain the stuff of legend. His corners allowed United to pull off the most exciting of late European Cup wins against Bayern Munich in 1999. And his swerving free kick which defeated the Greece goalkeeper brought England an added-time World Cup qualifying reprieve with a
2-2 draw in 2001.

Perhaps those moments – and his impudent strike from the halfway line against Wimbledon at Selhurst Park – represent the indelible examples of David Beckham’s 22-year career.

This book will jog your memory about the many other highs and lows.