Happy Birthday, Premier League. Or is it? JANINE SELF reviews Ian Ridley’s latest book and finds it a fascinating and insightful read

If the Premier League was a person, he would be a second-year university student by now, teenaged angst and acne replaced by the clear-skinned certainty that the world is sitting there, waiting to be ruled. And who better to rule than the biggest collective global brand in football? The best league, the best players, the best product, blah-di-blah.

Sky’s history revisionists have it that football did not exist before 1992. It did, but the sport was on its knees. Antiquated stadiums, the hangover of hooliganism, tragedies at Hillsborough and Bradford and a depressed economic situation had pushed the glorious game to the precipice. 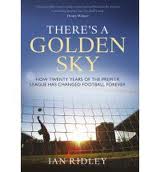 Then along came the Premier League (for a few years, the Premiership) and look what happened.

Traditionalists mourn the passing of “the old days” and critics accuse football of losing its soul. Sepia-tinted nostalgics remain hostile to the all-consuming marketing magnet which hogs our television screens, our back pages, the internet, even our smart phones.

Journalist, author, broadcaster, scriptwriter Ian Ridley drums his fingers to a footballing heartbeat. On the one hand, he has all the healthy cynicism of a journalist. On the other, he has an enduring love for the sport of football, particularly at grass roots level. He is a former chairman of non-league Weymouth and a current chairman of St Albans City, which goes to show that he is also a glutton for punishment.

Two decades ago Ridley wrote a book Season in the Cold which was, in his words, a snapshot of the game. Now, to coincide with the Premier League’s 20th anniversary, the Daily Express columnist has penned a follow-up entitled There’s a Golden Sky  and a fascinating read it is, too.

Ridley spent last season travelling round the country, from Truro to Newcastle via Blackpool, Crewe and Hackney Marshes. He spoke to managers, administrators, officials. His Rotweiler tendencies helped track down and interview the reclusive Spencer Trethewy, who hit the headlines when, as a teenager, he “rescued” Aldershot in 1991. The club went bankrupt 18 months later and Trethewy has hardly been glimpsed since, so full marks to Ridley for persuading him to talk for the first time.

Not everyone was quite so willing or able to be interviewed. Whereas 20 years ago Ridley could just bowl up to Manchester United to chat to club secretary Ken Merrett, this time he was restricted to a trip round the museum at Old Trafford. Equally, the Professional Game Match Officials organisation stepped in to prevent him spending a day with referee Mark Halsey. Wonder why?

The point of Ridley’s pilgrimage round England’s green and pleasant pitches was to discover whether football had lost its soul. First stop, newly-promoted Blackpool, starry-eyed at the prospect of rubbing shoulders with the monoliths of Manchester and London. An excellent counterpoint to that was a trip to Portsmouth, decaying stadium and legacy of debt the stark reminders of what can happen chasing the dream.

Where the book really comes alive, however, is when Ridley goes to the likes of Truro and Wembley and Hackney Marshes. His love for the non-league game shines through, as does his eye for detail and a wonderful ability to draw a picture on the page. Plenty of soul there.

Ridley also looks at the modern phenomenon of “leveraging” – borrowing to buy – and wonders whether the bubble will eventually burst. Cleverly, he finishes by interviewing Paul Gascoigne and writes:

“When the Premier League was conceived, Gazza was still a simple lad from Gateshead who just wanted to play football. Then the bright lights turned his head, as did agents and hangers-on and his illness was ignited. We watched it all, sensed that it would either implode or explode.

“When it exploded, Paul Gascoigne at last, thankfully, settled into a less frenetic, less money-driven life where he reappraised his priorities. His recovery would need humility and daily nurturing of his abstinence to sustain him in a new healthy lifestyle, physically and emotionally. Perhaps the modern game he helped create could learn from the symbolism of his story.”