John Terry strode on to the Premier League stage as a nervous and gangling teenager in 2000, before developing into a football Colossus at club and international level. 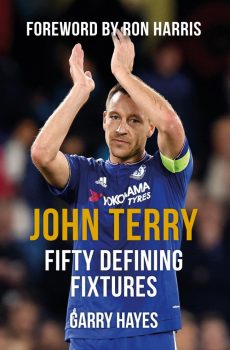 Since Steven Gerrard moved abroad, there are few players left in England who dominate their clubs so completely.

Terry is the perfect example of a modern defender, the type of strong but mobile opponent no forward relishes playing against.

I first encountered Terry at Leyton Orient’s Brisbane Road Ground. He had just been outstanding in an England Youth game and the Football Association produced him for interview afterwards. The 17-year-old came across as mature beyond his years, clearly promising greatness.

From his League debut on loan at Nottingham Forest in 1999-2000 at 19 to his 700th Chelsea appearance in an FA Cup defeat by Everton in March 2016, Stamford Bridge fan Garry Hayes puts Terry’s career under close scrutiny. He has done a fine job of tracing Terry’s career through a series of the matches that mattered most.

Only two players had previously reached 700 games for Chelsea: Peter Bonetti and Ron Harris. Teak-tough Harris provides the book’s foreword writing of Terry, “He has become the perfect example for anyone who not only wants to play for Chelsea but also supports the club, a terrific lad. We both captained Chelsea after coming through the ranks and I think fans appreciate that. I had a bet with John and Frank Lampard a few years ago that neither would beat my Chelsea appearance record of 795 games. I’ve seen Frank off but John is still going strong. He will run me a lot closer.”

Terry’s career hasn’t always run smoothly, on or off the pitch. To go with the 16 trophies he’s won at Chelsea are the well-publicised nightclub incidents, an ill-advised relationship with the girlfriend of teammate Wayne Bridge and a racist incident involving Anton Ferdinand.

Moscow 2008 brought Terry’s lowest moment on the pitch. He missed a penalty that would have seen him lift the European Cup for Chelsea against Manchester United, who went on to win the shoot-out leaving Terry in a tearful, crumpled heap.