Richard Bath, sports editor of Scotland on Sunday, has taken some time out to pen a book, Notorious, that collects tales of 100 of sport’s most outrageous, and outraging, characters, the hard-men and the criminals, the psychos and the loonies, that make up the sporting madness hall of shame. Here, in an extract from the book, he Mad, bad or just dangerous to tackle? Australian rugby league hardman John Hopoate merits inclusion thanks to his predilection for slipping a rigid digit up opponentsâ€™ arses on the field of play. It happened four times – thrice against Queensland Cowboys and once against St George-Illawarra – leading to his sacking by Wests Tigers after NRL commissioner Jim Hall said that â€œin my 45 years in rugby league, never have I come across a more disgusting act.â€

Hopoate, who was caught on film sticking his finger in all the way up to the knuckle, thought it was all a bit of a laugh, but then maybe he was just trying to fit in because he was playing against North Queensland Cowboys, an outfit who play in an area of the country Aussies call the Deep North, an agricultural region where men are men and sheep are petrified.

His victims, however, weren’t so impressed. “I couldn’t believe it. It felt like he made an attempt to stick his hand up my arse. I shit myself,” said pokee Craig Smith. The Cowboysâ€™ captain Peter Jones was also in no doubt that it wasnâ€™t funny: â€œIt wasnâ€™t a wedgie. Thatâ€™s when your pants are pulled up your arse. I think I know the difference between a wedgie and someone sticking their finger up my arse.â€

A third victim, Paul Bowman, said that â€œif Hoppa was a man, he wouldnâ€™t do thisâ€, but Bowmanâ€™s coach Terry Hall thought it was all a storm in a teacup: â€œThings were much worse in my day: Iâ€™ve had blokes grab my family jewels, blokes gouge me, blokes pull my hair. Hoppo hasnâ€™t hurt a bloke for Christâ€™s sake.â€

Since Hopoate was banned and then fired by Wests, things havenâ€™t got better for the rogue. After finally getting back into the game, he was almost sacked by Manly after he was banned for abusing 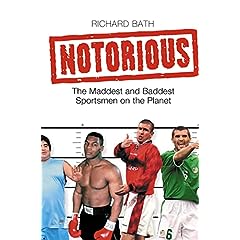 match officials, after which he was forced to issue a grovelling apology for abusing a ballboy during a match against the New Zealand Warriors in March 2005.

He was finally sacked by Manly after he was banned for 17 weeks for a sickening assault which laid out Cronulla Sharks forward Keith Galloway, almost ending Gallowayâ€™s career and killing the 30-year-old Hoppaâ€™s career stone dead.

The botty-botherer is now pursuing a career in boxing but still canâ€™t keep out of the news. Acting as a waterboy in a match between his teenage sonâ€™s Manly Cove side and the Western City Tigers in the Sydney rugby leagueâ€™s under-13 cup in 2005, he was banned from the touchline for abusing officials. According to officials, Hoppa first swore at the referee and touch judges before inviting all three outside for a â€œsquare-goâ€.

There’s plenty more where that came from (as the bishop said…). If you want to order a copy of Notorious, click here.