In Lincolnshire, football fans remain in awe of a Spanish footballer. ERIC BROWN has found the book that explains why

Alex Calvo Garcia is hardly one of football’s household names. Indeed, outside Lincolnshire, his career passed most of us by with ease.

Yet after being written off in his home country, the Spanish midfielder became a legend in Scunthorpe. Admittedly, there probably wasn’t much opposition.

Having failed to establish himself with Beasain and Eibar in Spain’s lower leagues, at 24, Garcia packed his bags gave himself one last chance at making it as a professional footballer.

At the time, in September 1996, foreign players were still a novelty in English football and a rarity in the lower leagues. But Garcia happily traded the Basque country for Lincolnshire’s landscape of steelworks and docks. When he arrived, he couldn’t speak a word of English, sometimes with comic results.

Eventually, he was offered a contract until the end of the season at £525 a week – double his money at Eibar where he was managed by Xabi Alonso’s father. By this time, Garcia has acquired a few words of English, too, and returning to his digs he informs his landlady: “I contract! Beer!”

It’s the start of an eight-year love affair with Scunthorpe, featuring more ups and downs than a hotel lift. Soon he is translating the fans’ slogan “Scunthorpe till I die” into “Scunthorpe hasta la muerte”. And it was Garcia’s goal in the play-off final at Wembley which earned Scunthorpe promotion.

Inigo Gurrachaga, a renowned Basque sports journalist, traces Garcia’s tortuous journey through many of the backwaters of English football in an enjoyably quirky book that frequently wanders entertainingly off the central theme down all sorts of blind alleys.

Among the topics discussed are the film Get Carter, Joan Plowright’s marriage to Laurence Olivier, the employment history of strike partners Kevin Keegan and John Toshack,  Spanish explorers, the merits of the book Tom Brown’s Schooldays, the contrast between upper-crust founders of English football and the working class who claimed it for themselves, the foundation of the Wesleyan Church, Brian Clough and the Dylan Thomas masterpiece Under Milk Wood. 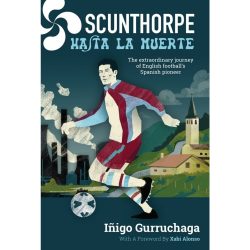 Somehow this wide ranging and seemingly disjointed narrative hangs together thanks to the skill of Gurruchaga, the London correspondent for the Basque newspaper El Correo. He concludes with a pay-off I defy any reader to wade through dry-eyed.