Brian Scovell is a prolific sports book writer. His 27th is about a memorable summer of England football and cricket, and is reviewed by ERIC BROWN

It is one of those years that sticks in the memory and produced an unforgettable sporting summer for those lucky enough to be around at the time.

The year 1966 brought England’s greatest – and only – international football success but also saw the visit of a fine West Indies side for five Test matches. The cast for those events reads like a sportsman’s Who’s Who: Bobby Charlton, Bobby Moore, Franz Beckenbauer, Eusebio, Colin Cowdrey, Tom Graveney, Wes Hall and Gary Sobers, plus a whole lot more superb supporting acts.

SJA member Brian Scovell, who completed a 40-year innings with Associated Newspapers before retiring to write books, was fortunate enough to cover both the football and cricket that year for the Daily Sketch (remember that?).

He cleverly weaves action from both stages together, illustrating the narrative with some of his dispatches written at the time and introduces some anecdotes often involving other leading journalists of the era.

One revelation in the World Cup section is how close Jimmy Armfield came to being the triumphant England captain who lifted the trophy aloft. Scovell maintains that manager Alf Ramsey was leaning towards Armfield for the right back spot after he captained England in two build-up matches against Yugoslavia and Finland which were won 2-0 and 3-0. It seems incredible today, but Ramsey was also wavering over whether to select Moore or Norman Hunter of Leeds who also played those two games.

Eventually Moore and George Cohen were re-instated for the final three build-up games, retained their shirts and the rest, as they say, is history. It was so near and yet so far for Armfield, who dropped out on the cusp of World Cup glory after playing 37 of 38 matches at right back, leading the side in 13.

Perhaps I found the cricket section of this book marginally more interesting because far fewer words have been devoted to the England-West Indies series than that summer’s other sporting action.

You could pick an all-time England XI from that lot. There was so much talent the selectors could afford to drop Milburn and Cowdrey, And still England were slaughtered. They never mastered the pace of Wes Hall and Charlie Griffith, who was suspected of chucking. Shell-shocked Ken Barrington asked to be left out and went on holiday after being given a thorough working over by the fast bowlers.

With Lance Gibbs superbly backing up the opening bowlers and Sobers seemingly able to bewitch England with bat and ball, it was a rude awakening for the home side who needed three captains – MJK Smith, Cowdrey and Brian Close during the
3-1 series defeat.

Scovell graduated to the Sketch, and later the Daily Mail, via his local Isle of Wight paper and the Press Association. I have known him for many years during which we have often played cricket with and against each other at home and abroad. I know he is a stickler for accuracy and will be hugely disappointed how his book turned out. 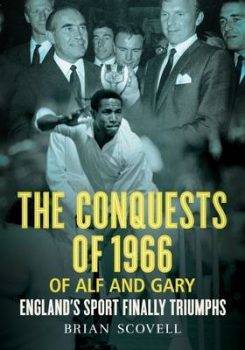 Was it a rush to print that has spoiled the flow of Brian’s writing and allowed many errors to creep through uncorrected?

For example, a player called Ray Wood is said to have gone shopping with Bobby Charlton on World Cup final day and later attended the celebration banquet. This was not the former Manchester United goalkeeper but should have been Ray Wilson.

Nobby Stiles’s name at one point is misspelled “Styles”, England’s quarter final opponents are “Argentinia” and even Ken Wolstenholme’s much-repeated sports commentary of the century is misquoted as: “They think it’s all over…now it is.”

Then there’s a picture captioned Peter Springett when it is his brother Ron.

It all makes for an overall impression of, to misquote Mark Twain, “a good read spoiled”.