Ed Hawkins, the SJA/Victor Chandler Sports Betting Writer of the year, has managed to irritate, fascinate and entertain PETER WILSON in equal measure with his new book 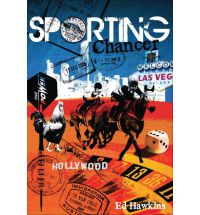 Joining a start-up newspaper was always a risky venture – a gamble, maybe – but the offer of more money and being at the forefront of a new era in print journalism, yes they always threw that little lollipop into the equation, was too much to refuse. Of course, for us hacks who were around in the 1980s, we were safe in the knowledge that if it failed, we could take the redundancy money and probably walk into another job, via the pub, of course. Indeed, there were so many new papers in the mid-’80s that some colleagues made the rounds of them just to collect the redundo.

When Ed Hawkins left the Racing Post (he wrote on cricket betting, which showed he was ahead of his time and would have been better off doing it on the sub-continent) for The Sportsman, it was like the ’80s all over again. The problem was that starting a new paper in 2006 while all the other established ones were recording falls in circulation was not the brightest idea. Also, the swingeing cut backs that were biting deep throughout what is still termed as Fleet Street made it more difficult to find another position if the new venture failed, as The Sportsman did after only seven months in October 2006 with debts of almost £4 million.

Hawkins, whose father was racing correspondent of The Guardian for 27 years, decided to take his redundancy cash and gamble his way around Australia, with £1,300 as his target profit. His quest coincided with England’s disastrous Ashes tour, although Hawkins had more success than Andrew Flintoff’s side, which was not difficult.

The story is told in Sporting Chancer: One Man’s Journey to Take on the World. Of course, Australia is not the world, but Hawkins has a stop-over in Singapore, bets with an elderly passenger while flying over Pakistan, and takes another trip, to the United States, before ending his journey in, er, Glasgow.

It is very much a book of two halves. The first section in Australia is light-hearted, full of gambling with the circumstances of his trip bringing out the best of the humour. The second part, to the US, in particular, is darker, has very little betting, but is journalism of the highest quality.

The Aussie leg (via Paddington station, where he loses his first bet of the sojourn, on the greyhounds, and Singapore, where he turns up at a racetrack to find no live racing only meetings televised from South Africa and Hong Kong) is good fun as Hawkins spread bets his way through the Ashes series staying in the threadbare accommodation his limited funds could afford.

You want Hawkins to do well and not just because he was voted the Sports Journalists’ Association’s Betting Writer of 2010 (the judges’ citation said that he wrote “in an entertaining way to make sports betting come alive, even to non-punters”), although in hindsight you know his bet that England will win one Test match is doomed to failure.

You engage with the people he meets, although tire of the jokes and puns he feels are necessary (and that does not include the references to birds and tits, neither of the variety that would get Bill Oddie excited). Hawkins is a sports journalist not a comedy script writer and fails to recognise that his trip is amusing in itself; the jokes are juvenile and, at times, insulting, or plain wrong (religious extremists have long beards, do they Ed? Check out the 19 terrorists who hijacked the aircraft on 9/11).

He denigrates people playing the poker slot machines (pokies) while in Sydney because there is no skill attached. Ironically, Hawkins ends his journey in a Scottish bingo hall.

“What I understand is the difference between the sort of betting that I do (sports bets which have logic and statistical research as the cornerstones) and those that the pokie maniac attempts,” writes Hawkins, who spent hours in a Melbourne casino on Christmas Day (“Total losses reach £175 thanks to a continuing reckless Blackjack strategy and not-reckless-enough poker game plan”).

It is in Sydney where betting addiction is first confronted. He later visits Glasgow’s Gamblers Anonymous office, professionally, of course, where we are provided with 14 uninterrupted pars in quotation marks, without even a “he says”, or “he adds” to break them up, of Tommy, “a reformed addict”, saying why he has not had a bet for 40 years. It is powerful stuff.

Ed returns home for a short spell back to a flat mate who has had to wrestle with the twin dilemmas of how to get Sky Sports on the TV (cancel the subscription, was Hawkins’ advice from Australia) and a rogue mouse, and then, as we find out later, a health problem that baffles doctors.

Then he takes his non-addictive betting habit off to the US – “I had the urge to challenge myself once more”. It is a section that starts off disappointingly, as if he was writing for a lads’ magazine, but perhaps that is what Las Vegas does to you, although his habit of calling male friends “dad” might interest a few psychoanalysts, as might the statement: “Whenever a woman provides me with something, I fancy them. It must be a maternal thing”. And you wait an eternity for him to have a bet, the whole premise of the book. When he does, at a media poker event, he is drunk, reads his cards wrongly and loses.

“Thought I had a pair of kings,” he mumbles to his rival, Shannon Elizabeth, who, and I can only trust Ed’s recollection for this, appeared in American Pie (she is among a number of famous actors and sportsmen who have walk-on parts in the book).

When Hawkins heads for New Orleans and Louisiana the book takes a sudden leap in quality. Yes, there is less gambling, and it becomes more serious as he tackles the aftermath of Hurricane Katrina (his only bet is with a vagrant drug addict who lost his home and possessions in the disaster; a bet he wins but decides not to collect on) and the issue of cockfighting (his bird won the fight, which allows Hawkins to clench his fist in joy even though he is not comfortable with what has taken place).

If the first part of the book is memoir, the second part is firmly in the journalism camp. The writing and reportage are first-class. There are even fewer split infinitives, which not only makes a sentence read better but also allows the writing appear less rushed (Simon Heffer calls them “inelegant” in his recent book, Strictly English) and the jokes, not surprisingly, trail off.

It is almost as if two books have been merged into one. Indeed, the Louisiana leg feels like a book waiting to be written – on the different things that people worldwide bet on (cockroach racing anyone?). Hawkins writes so well and is so sympathetic to his subjects that not only do you feel sorrow for Katrina victim Sean Kamplinski but even the rednecks at the cockfighting, one of whom used to be Britney Spears’ babysitter, come over as reasonable people. Hawkins has that crucial ability for an interviewer: to make your subjects relaxed enough to open up.

This book is enjoyable, irritating and fascinating in equal measure. I definitely recommend you throw it into your suitcase for the holidays or even read it on the aircraft. You never know. You might find someone to have a bet with.