How do you ghost a book for a sporting figure who has become renowned for using racist language when they thought their TV microphone was turned off? NICK TOWNSEND interviews the ghostwriter of Ron Atkinson’s autobiography

Rarely has stature, so hard-earned, been so swiftly destroyed. 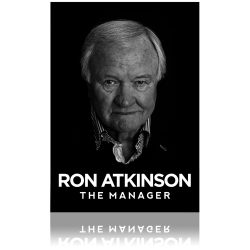 Ten seconds, that’s all it took for Ron Atkinson, once regarded as a man of honours – the only English football manager to have won major trophies with three different clubs – whose idiosyncratic phraseology and knowledge allowed him to reinvent himself as the nation’s most recognisable television pundit on the game, to become defined forever by one word.

One word from which there will never be a pardon for any amount of contrition.

Twelve years on, it means there’s one probability about anyone opening his insightful book Ron Atkinson: The Manager. They will not dwell on Big Ron’s years as a player and manager, including FA Cup triumphs with Manchester United in 1983 and 1985, and the League Cup victories with Sheffield Wednesday in 1991 and Aston Villa in 1994.

Instead, they will scan through to the moment that cost him his mainstream broadcasting career.

Away from the broadcasters’ microphone, Atkinson was renowned for vocal talents leading to him once being asked to belt out Sinatra classics at Ronnie Scott’s.

Which leads inescapably to the thought: if only he’d been well away from his discarded TV microphone on an April night in Monaco in 2004 after Chelsea had lost the first leg of their Champions League semi-final 3-1. Or, preferably, not uttered the 13-word denunciation of Chelsea’s Marcel Desailly, ending in the N-word he claims to “have never used before or never used since”.

Many sins can be cleansed by time and declarations of atonement. But not racism. And certainly not that word.

Even the publication of a book in which Atkinson concedes his shame and admits his use of that word was “idiotic, stupid and offensive” (although not without a side swipe at Brian Barwick, then the head of ITV Sport, whom he claims had “a huge leaning towards Liverpool” and “if I had been the former manager of Liverpool rather than Manchester United I suspect he would not have finished me over the Desailly affair”) has not spared him further opprobrium.

The Daily Mail’s Charlie Sale has revealed this week that the National Football Museum has refused to stock the book and allow any signing sessions on the grounds of “potential negative response from our visitors”. One national newspaper, which had planned to serialise the book, pulled out at the last moment “because of the racism element”, according to Atkinson’s collaborator Tim Rich.

One suspects that certain sports journalists and authors would have baulked at the opportunity to ghost the memoirs of “a racist”. Rich, football writer for The Independent, says he had no qualms “though I was warned I may get abuse on Twitter, that kind of thing, from ‘the bedroom warriors’.”

He adds: “Ron has tried hard to make amends, but these days it’s quite a deep stain to remove. He has apologised repeatedly for it, and unquestionably he’s not a racist.”

For Rich, the great irony is that, in the 1970s, a time when the game was rife with racism, Atkinson had arrived as manager of West Brom from Cambridge United and immediately signed black player Brendon Batson from his former club to play alongside Laurie Cunningham and Cyrille Regis. Never before had a team in the top division of English football simultaneously fielded three black players on a regular basis.

“He made a racist remark but is that the same as being a racist?” says Rich. “I don’t know why one remark counts for so much more than beating someone up. I don’t see it.”

Rich refers to footballer Joey Barton, whose own book, No Nonsense: The Autobiography was also published recently. Barton was jailed for six months in 2008 for a violent assault on a man outside a McDonald’s restaurant in Liverpool city centre. He was said to have punched the man 20 times, causing him to lose consciousness, before an attack which left a teenage boy with broken teeth. Sentencing the England international, Judge Henry Globe described the attack as “violent and cowardly” and branded Barton a “disgraceful coward”.

Rich adds that the N-word is, “Probably the only word you can use now that would have the impact it has. Ron’s career was finished by his use of it. Although Barton went to prison, his career had a distance to run.”

Intriguingly – at least to those of us who have ghosted memoirs – it is necessary to skim through to the 19th of the book’s 21 chapters before the Monaco incident is broached.

Chapter 1 begins with Atkinson recalling the night at Wolves (he was then a 15-year-old on the ground staff) in 1954 when the Hungarian champions Honved, including Ferenc Puskas, came to play a friendly against the English champions – a game that was instrumental in the creation of the European Cup.

Rich agrees “it would have been the obvious thing” to confront the racism issue in chapter one. “It tarnished every one of his achievements – it was the trashing of his reputation in 10 seconds.

“But I felt that Ron watching the Hungarians play at Molyneux in 1954 was the thing that changed his life, in the same way that people hearing Little Richard, or Elvis, say, may have changed their lives. That night in 1954 changed his whole approach to how football should be, how it should be played.”