Book review by Michele Verroken
Dick Pound’s previous book, Inside the Olympics, was released on the eve of the Athens Games, just in time to be picked 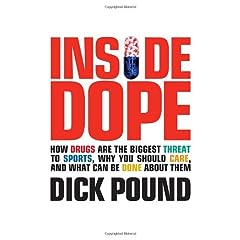 up at airports by visitors and participants on their way to Greece. Which makes the timing of the launch of his latest book, Inside Dope, very interesting.

Perhaps the prospect of Pound stepping down next year from chairmanship of the World Anti-Doping Agency, a role he has held since WADA’s creation, inspired this controversy-laden contribution to the drugs and sport debate. As with Inside the Olympics, the style of the book is built around Pound himself, his hand in or observations of issues which underscore his view that the sporting world is awash with doping and that any claims otherwise demonstrate a cover-up.

There is no doubting the impact of WADA and its Code on sports and governments in bringing about the harmonisation of key elements of the way that doping offences are defined and managed, as well as some resolution of who has responsibility for managing anti-doping – sport or government.

These debates would still be running today, had it not been the watershed events at the conference in Lausanne in 1999, even though my recollection varies from that summarised in the chapter “Why Do We Need to Regulate Doping?”

Perhaps that is because I was sitting with the body of government delegates, next to Tony Banks MP from the UK and US General Barry McCaffrey, alongside objecting athletes, notably from Canada, while Dick was up there on the top table sitting beside Juan-Antonio Samaranch, watching the IOC President take the criticism for the corruption and scandals of Olympic Games bidding.

Was this the turning point for Dick Pound to build his empire in a different place?

In many chapters of this memoir, opinions replace facts, although no doubt scholarly quotes and referencing will propel the bookâ€™s contents into established hearsay. In the bookâ€™s introduction, the list of 13 deaths of sportsmen between January 2003 and November 2005, many of which Dick claims “are directly connected with performance-enhancing drugs, whether or not their presence was detected at the time of death”, is intended to shock. It may also surprise some of the families of those listed (such as Cameroon footballer Marc-Vivien Foe), who may have a different explanation for their loss.

Over three pages of implausible doping excuses in the chapter on “Testing: the Games People Play” are intended to ridicule defences offered. So who is right? It is difficult to envisage legal challenges to Poundâ€™s claims, as this puts you into the category of “part of the problem”. Unfortunately, Pound does not pick up his own colleagues in the legal profession, who are the main beneficiaries of doping cases for creating these defences.

The coherent arguments of chapter 11, “Drug Cartels and Drug Pushers in the Wide World of Sport” contrasts with the media soundbyte style of earlier chapters, and perhaps the telling aside on page 169 reveals more about the Pound agenda: â€œ If I had it to do over again â€“ and I might – â€¦I think I would…â€.

The final chapter is clearly the future agenda for WADA and for the next chairman to work to, setting out, in Poundâ€™s words, the Ten Step Program for “the cure”.

But throughout the book, there are swipes right and left at his adversaries. First, in the chapter “See No Evil, Hear No Evil, Speak No Evil”, cycling and Lance Armstrong get the Pound treatment. He welcomes the prosecution of former East German coaches by the German authorities, although makes no suggestion of proposing rewriting Olympic records based on these prosecutions.

His view on maintaining medical confidentiality is interesting, as he dangles the Hippocratic Oath and possibility of exposure by WADA through the publication of rejected applications for therapeutic use exemptions, naming athletes, physicians and reasons for rejection as possible ways to deter doping. Such ideas will not endear him to the professional sports, nervous about ceding any personal information to WADA.

The book will achieve the engagement of these sports, if only to provide opposition and balance to his extreme views.

In the book’s Afterword, Pound reprises his distrust of cycling in the wake of the Floyd Landis positive from the 2006 Tour de France, declaring that the international cycling federation is incapable of effective anti-doping without WADA.

American sprinter Justin Gatlinâ€™s rock and hard place is noted and Pound accepts that “lawyering” may have led athletes to declare they have never knowingly taken prohibited substances; of course, it could be true, but in Poundâ€™s world, doping is not an accident.

This is a high risk strategy that one hopes will not be undermined by future revelations about WADA itself. Notably absent from Pound’s book is any mention of WADAâ€™s first chief executive, the Finnish government official, Harry Sylvasalmi, who left under mysterious circumstances, to be replaced by David Howman (from New Zealand, and another lawyer), nor the directors of WADA who are left to pick up Poundâ€™s collision with their stakeholders. Perhaps these areas are not as interesting as Pound’s outspoken views on well-known sportsmen and women?

Despite this, the book provides an interesting perspective from an influential insider and will be appreciated as a source of verbalising the unthinkable.

Inside Dope – How Drugs Are the Biggest Threat to Sports, Why You Should Care, and What Can Be Done About Them – by Dick Pound, Wiley Publishing.

Michele Verroken is Director of Sporting Integrity, the sports business consultancy. She is the former director of ethics and anti-doping at UK Sport, responsible for bringing the UKâ€™s anti-doping policy into compliance with the International Standard for Doping Control, the template for the World Anti-Doping Code