Newport County sacked their 40th manager and face a League Two survival scrap after winning just one of their first nine games. ERIC BROWN looks at a history of the club

It is difficult to think of a town where football has faced greater hardship. 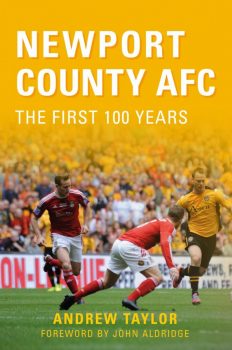 Yet Newport County have survived against all the odds to celebrate a centenary that often appeared an unattainable goal as cash ran out, players deserted and their ground was locked up.

Sandwiched between the Severn Bridge and Cardiff, dominated by a giant steelworks, some might suggest that Newport would struggle to finish last in a most beautiful town contest.

Football there must always compete with international-class rugby union, so it takes a huge slice of dedication and determination to keep the round ball game alive.

Somehow enough selfless directors, backers and players have thrown in their lot to preserve football in Newport for more than 100 years. Yes, a century of more ups and downs than a lift in The Shard.

Club historian Andrew Taylor’s book Newport County AFC: The First Hundred Years – ahh, the essential optimism of the true fan contained within that “first” – tells the incredible story of a battle against empty coffers, an often unsympathetic council and occasionally hostile Welsh FA to keep Newport on the football map.

Perhaps the book is slightly mistitled as the original Newport County lost its battle against bankruptcy in 1989. But the way supporters rallied immediately to form a new club, first as Newport AFC and then Newport County AFC, before climbing back into the Football League is an inspiration for many clubs faced with a similar plunge into non-league obscurity.

My first visit to the club’s Somerton Park home came during a quest to visit all 92 League clubs. One look and Newport went straight to No1 on my list – as the ugliest, most depressing ground I had yet visited.

It was a Wales under-23 game and Mark Hughes got sent off. To their credit the Welsh FA produced a fresh-faced, contrite young Hughes for interview afterwards.

Hughes never played for the club but plenty of familiar names coped with the surroundings and spewed from an ever-revolving door over the years. Alf Sherwood, Trevor Ford, Tommy Tynan, Tony Pulis, Darren Peacock, Bob Latchford and Leighton James are just some of the more familiar names to have worn amber and black.

Among the oddballs was a goalkeeper who read books by Charles Dickens and George Bernard Shaw in the dressing room at half time.

Despite the many lows there were a few triumphs, too, with championships, a Wembley cup final and a stunning run to the European Cup Winners’ Cup quarter-final in 1981, when John Aldridge was one of their strikers and they lost out only on the away goals rule to Carl Zeiss Jena.

That was a long way from the humble Hellenic League where the new club began their eventful journey back to the Football League. Current tables reveal Newport are again battling to preserve that status.

If the unquenchable spirit that prevailed through the first 100 years is still alive at their Rodney Parade base, you can back Newport to survive once again.