Bob Latchford was one of those nearly men of English football. A top-drawer centre forward, capable of superb feats, but who somehow ended his distinguished career without a single major medal. 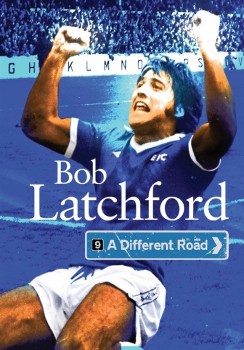 During 11 successive seasons of top-flight football between 1972 and 1983, England international Latchford scored more goals than any other First Division player and cost a British record fee. Yet Latchford is best remembered on a national level for his contribution to a newspaper circulation war during the 1977-1978 season.

His football career took many twists and turns. Some of them could be regarded as dead end moves and it is not for nothing his autobiography is titled A Different Road.

Born in Birmingham in January 1951, Latchford came from a footballing family. Elder brother David (Birmingham City) and younger brother Peter (Celtic and West Brom) were both goalkeepers. Snapped up by his local club, Bob formed a potent Birmingham attack with Bob Hatton and Trevor Francis which eventually took the club into the top flight.

His record of scoring at nearly a goal every other game over 190 appearances attracted the attention of Everton, who completed a record £350,000 deal including Howard Kendall and Archie Styles moving to St Andrew’s.

Liverpool were also interested, with Bill Shankly sending a representative to Latchford’s home too late to hijack the transfer. Latchford wasn’t impressed Shankly hadn’t turned up himself.

Latchford might have been a Championship winner at the end of his first full season. He scored 17 League goals for an Everton side seemingly destined to be champions. Top on Easter Monday, Everton were scuppered after defeats by bottom club Carlisle and another against the club who replaced them, Luton.

Then Sheffield United overturned a 2-0 half time deficit to win 3-2 at Goodison and Everton’s title challenge was in ruins.

Latchford describes this failure as the biggest regret of his career and blames manager Billy Bingham for neglecting to sign Peter Shilton as replacement for error-prone keepers Dai Davies and David Lawson.

He also claimed Bingham over-trained his players with tedious, strength sapping runs leaving too little in the tank for matches.

When Latchford was called in by chairman Alan Waterworth and asked his opinion of the manager, he didn’t hold back. “Billy’s got to go,” he said. “He’s lost the dressing room, lost the players.”

Under Lee there was little change of fortune for Latchford, with near-misses in the League and the League Cup.

That included another end of season fade to finish third behind champions Liverpool in 1977-1978. By the end, Goodison fans were more focused on whether buccaneering Bob could land a goalscoring consolation prize.

The Daily Express had offered £10,000 for the first top-flight player to reach 30 goals that season. It seems unlikely now but their solo enterprise soon grabbed the attention of other media outlets who happily gave it publicity.

Francis Lee had been the only man to achieve 30 goals in the 1970s, and he needed 13 penalties to make it. Latchford needed two goals in Everton’s final game against Chelsea to reach the landmark, but when they led 2-0 without his name on the scoresheet the task looked beyond him. Happily Latchford got there with a header and a penalty to seal Everton’s 6-0 win. Cue a pitch invasion which could not have been bettered had Everton won the title.

Even this career-defining feat had a cruel twist in the tail. Latchford donated half his winnings to the PFA and shared the rest with his team mates. He was left with just £192, but spent years fighting the taxman over his liabilities.

He lost and ended up hugely out of pocket.

By now Latchford was an established England international – he won 12 caps – but injuries began to take their toll. He had been in and out of the Everton side when incoming boss Kendall accepted a £125,000 offer for him from Swansea. It might have been Chelsea, but Latchford says he found manager John Neal “uninspiring” and chairman Ken Bates “a complete jack-the-lad frankly full of bullshit”.

Latchford had another near-miss for the title in a Swansea team of stars assembled on costly contracts by John Toshack. He won the Welsh Cup but when the cash started to run out, Swansea were relegated and Latchford was among many promptly dumped to repair financial damage. From there it was mostly downhill.

A move to Holland with NAC Breda was followed by spells at cash-strapped Coventry City, Lincoln and Newport County, as Latchford plummeted down the football ladder.

I finally caught up with him at non-League Merthyr Tydfil when they defied all the odds to earn a European crack at Italian giants Atalanta. He missed the home tie through injury but I met him next day at his wife Pat’s shop near Swansea. We were able to reminisce about his Everton career as well as talk about Merthyr’s task in the return leg.

Latchford’s tale evolves on a personal level through the sudden and devastating loss of Pat, his remarriage to Andrea and eventual decamp to Austria where he became a father again at the age of 52.
Perhaps there are greater rewards in life than football medals.