The shortlists for the sports books of the year have been announced. Here, ANTON RIPPON reviews one of the contenders

In 1953, we didn’t have a telly. Nor did many other people. So on Saturday, May 2 that year, I went over to my mate’s house, just across the street from us in Derby. His parents had bought a set for the Coronation. That was still a month away, though. This was more important: FA Cup Final day. 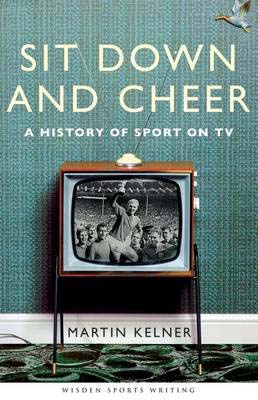 In a darkened front room crammed with neighbours, I stared transfixed at a 9in-screen encased in a walnut cabinet so bulky that it made the grainy black and white picture appear even smaller. On that screen the flickering ghost of Stanley Mortensen scored three times to help Blackpool beat Bolton Wanderers in what, despite Mortensen’s heroics, is still known as the Matthews Final.

And so I witnessed one of the great Cup Finals. More to the point, so I now realise 60 years later, I was also watching a seminal moment in the reporting of sport.

That much occurred to me as I read Martin Kelner’s Sit Down and Cheer: A History of Sport on TV. For when it came to covering sport, the 1953 FA Cup Final was the event that tipped the balance in the battle between radio and television.

Even then, there was a long road ahead. On July 30, 1966, another famous date in the nation’s sporting history, BBC television still felt the Hippodrome Circus  at Great Yarmouth worth longer coverage than a preview of England in the World Cup Final, although the Beeb did push out the boat and extend coverage by a whole 20 minutes once victory was assured.

Kelner happily admits that he is undoubtedly best placed to write this book. After all, his Guardian column about sport on television long entertained. “The trouble with most histories of sport is that they are written by people who were there,” he writes. They “need to be written by someone who stayed at home and watched – and my credentials to be its author are impeccable”.

The story of how we arrived at today’s 3D, 24-hour multi-channel coverage is a fascinating one, starting as it does with the first-ever television sports broadcast – the 1936 Berlin Olympics. The 2,000 viewers in Britain – well, London, actually – who owned a set had to wait until the following year when the BBC screened Wimbledon tennis.

Although until the late 1950s, the BBC’s television sporting output centred on cricket and tennis, Kelner’s book inevitably dwells on football – and with football come the commentators, men like Wolstenholme, Coleman, Motson and Tyler.

However, the man who Kelner sees as a “key figure in the history of sports commentary on TV” is none of them. It is Barry Davies, who bridges the gap between “ … gentlemen-commentators like Kenneth Wolstenholme and Peter West and the hard-nosed professionals, who look to stamp their personality on a match with opinions, statistics and in some cases carefully scripted ad-libs”.

Sit Down and Cheer: A History of Sport on TV is as much social history as it is about sport and the media. It is also just as entertaining as the sports column that helped spawn the idea (now with a new home at the Racing Post), a cracking journey full of humour, as one would expect, but also painstakingly researched to provide many fascinating nuggets of information.
And it needed to be written. As Kelner states: “To chronicle the last 60 colourful, tempestuous years of sport through the eyes of those who were present is to ignore a multi-channel elephant in the corner of the room.” As we all know, that is impossible to do.