With British sport trying to cope during the current Covid-19 pandemic, award-winning author Anton Rippon has gone back 80 years to highlight the challenges of playing on during the first full year of World War 2 .

Four months had passed since Britain declared war on Germany and citizens uneasily waited for the full implications to arrive. 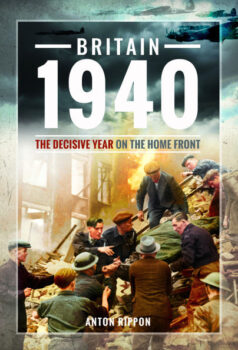 The year 1940 began with young men called up to uniform seeing no action save constant drills, weapons practice and fitness training. Everyone carried gas masks but there was no poison gas, the sound of air raid sirens no longer caused stampedes for the shelters and there was no food shortage.

Petrol was the only major commodity rationed and even blackout regulations were relaxed after it emerged road casualties had soared.

But this phoney war ended in May when German air raids on British cities began in earnest, killing 15,000 citizens by the year end, setting buildings ablaze and reducing whole streets to rubble.

Sport at first attempted to carry on during this momentous year but eventually most organised competition succumbed to the inevitable.

A national poll conducted by Mass Observation concluded banning all sport might damage morale. “One Saturday afternoon of League matches could do more to affect people’s spirits than the government’s recent £50,000 poster campaign urging cheerfulness,” it said.

The organisation could not find one pre-war football supporter who thought it should be banned  during the war.

Unfortunately the poll also uncovered an uncomfortable truth: 65 per cent of football fans could not now attend matches because of Saturday shifts in munitions and other factories, travel restrictions and family obligations.

Football staggered on with matches played in front of sparse crowds and clubs often struggling to field teams. If air raid sirens sounded, matches were suspended immediately. It could be an hour before the all-clear sounded by which time spectators, and some players, had got fed up and gone home. For clubs like Charlton Athletic, Southampton and Portsmouth, all near prime bombing targets, this was a huge problem. In December 1940 Charlton closed down for the rest of the season with crowds below 1,000.

Southampton’s players had to spend a night in their coach when the driver got lost in the blackout, hit a brick wall and burst a tyre

Southampton’s players had to spend a night in their coach when the driver got lost in the blackout, hit a brick wall and burst a tyre.

In August 1940 the government decided football at Southend was too risky given the threat of bombing on warships moored off its pier. Manchester United’s Old Trafford , Southampton’s Dell and Leicester City’s Filbert Street were damaged by bombs. On one weekend only seven of 59 scheduled matches could be played. Eventually national league football was suspended and replaced by regional and War Cup competitions.

Other sports made adjustments. The 1940 University Boat Race switched from London to Henley to minimise bombing risk and the Epsom classics were rescheduled for Newmarket as the traditional Derby course had been taken over by the military.

Yet the Cheltenham Festival went ahead and the Grand National too despite objections from Lancashire’s chief constable who pointed out a shortage of air raid shelters at Aintree.

Cricket suffered similar blows to football with grounds bombed or taken over by military personnel. A few games survived including some between military teams but it was a token gesture.

In the end war declared any meaningful 1940 cricket season to be over.

There were far greater sacrifices to come.

Britain 1940, the decisive year on the home front, by Anton Rippon, newspaper columnist of the year in the 2017 Midlands Media Awards, is published by Pen & Sword. Price £19.99