With Britain hosting the half-marathon world championship in Birmingham on Sunday, 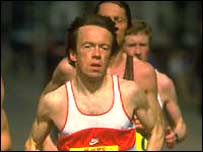 what would we do for a male road runner of the calibre of Charlie Spedding? STEVEN DOWNES says answers can be found in the Olympic marathon bronze medallistâ€™s recently published autobiography

I was sure that Chris Brasher had it in for me, and on this freezing February morning more than 20 years ago, he delivered definitive proof.

We were in the dining room of a very pleasant country house hotel in the Lake District on one of the early London Marathon press trips. At the time, I was news editor at Running Magazine, and still managing about 30 miles’ training each week, but was a long way off being what I would have called fit.

Brasher, as our host and the Marathonâ€™s head honcho, was calling out the names of the various feature writers and womenâ€™s magazine hacks who were about to go out on a 20-minute jog up and down the road as their token â€œlong Sunday runâ€.

Three or four training groups had been arranged, each allocated a local guide runner, by the time Brasher introduced us to a haggard Cumbrian fell runner who looked like what youâ€™d imagine you would get if a human DNA is ever mixed in with that of a mountain goat.

â€œHeâ€™s a great friend of mine,â€ said Brasher, the Olympic steeplechase gold medal-winner and Roger Bannisterâ€™s world record pacemaker, who had championed wild, fell running and orienteering for years in his Observer columns.

â€œHe knows the hills around here like the back of his hand, and will take the top group out for a three-hour run over the fells.â€

Brasher paused, for effect, because there was only three of us left in the room without a training group: Neil Buckley, a recent university graduate and decent middle distance runner who was doing work experience at Running (heâ€™s now a senior business correspondent at the FT, where he ran their Moscow bureau for many years), and Charlie Spedding, the London Marathon winner in 1984, Olympic bronze medallist and English record-holder. Oh, and me.

The mountain goat led we wary three out along a

flat bit of road before turning on to some pathway leading us inexorably upwards.

I donâ€™t remember us guests saying anything to one another for the next two hours, after we left the valley of a beck, crossed the fell wall and waded into knee-deep snow to embark on steep climb after climb, trudging behind our Cumbrian guide.

The mountain goat was clearly a man of very few words, apart from the occasional, â€œCâ€™mon, keep upâ€, which he snapped from over his shoulder somewhat dismissively back to us three mere mortals. We were the best part of two-thirds up our third mountain climb of the day before either Neil, Charlie or I dared to spare the breath to utter anything, and admit defeat or fatigue.

But when it came, from just behind me, it was the sound of angels that would carry me up and over the final peak and onwards.

â€œHow much more of this is there?â€ puffed a clearly tired Spedding. Yes, Spedding, the London Marathon winner, the Olympic bronze medallist, the English record-holder. It was Spedding whoâ€™d cracked first.

That was all the inspiration I needed to keep me going, mostly down the other side of the mountain, to the pub in the valley where Brasher and the rest would be waiting for us with pints and lunch.

Which perhaps offers one small example of the impact of psychology on performance, a topic which plays a very large part of Charlie Speddingâ€™s autobiography, From Last to First. â€œIf you donâ€™t believe the mind is the most important factor in athletic performance, itâ€™s quite simple â€” you are wrong,â€ Spedding writes.

While this book has been a long time in coming, and is something of a kitchen table effort, having been edited by one of Speddingâ€™s relatives and then self-published, it would do the volume a massive disservice for it to be only found on the “Athletics” shelves of book shops.

For this, assuredly, is a really well-considered, well-written and well-produced self-help book, with far more effective insight than that offered by the psychobabble in business management books like Who Moved My Cheese?

Letâ€™s face it, the story of the lad who placed plumb last in his first race at the school sports day, eventually winning an Olympic medal, ought to be an inspiration to anyone. Spedding tells his tale in detail that will fascinate any distance runner – his chapters on his Olympic marathons in 1984 and 1988 offer fabulous insights to such races – but with an added commonsense and perspective about the psychology that helped turn around his own career.

It is also telling that the fulcrum of this book, and, indeed, Spedding’s career, is in a chapter entitled “The Beer Drinkerâ€™s Guide to Sports Psychology”.

The chapter sets the scene of Spedding, nervously waiting for a business meeting, killing some time in a pub in Durham, pondering

his own unfulfilled running career â€” after all, he was not even the best distance runner at his club, Gateshead Harriers, let alone in Britain. â€œAverageâ€ is the word Spedding uses to describe his own achievements by the time he was 28. And words are very important to Spedding.

â€œFor years, I had assumed that my failure to run better was down to a combination of injuries and not training hard enough; but I started to wonder if it was my own self-image that was holding me back. If making a presentation could create such a strong physical reaction, the surely the prospect of winning a big race could cause a reaction that was strong enough to make sure I didnâ€™t win. Perhaps â€˜running quite well but not winningâ€™ was exactly what my subconscious self-image thought I should be doing.â€

Spedding explains further through the means of his own interest in crosswords, and the English language. â€œEnglish is a wonderfully diverse and expressive language. When used effectively, it can be incredibly descriptive, moving, uplifting, poetic, inspirational and eloquent.

â€œYet despite all this, when asked how my running was going, the word I chose to use was â€˜badâ€™. I qualified it by putting â€˜notâ€™ in front of it, but out of all the thousands of possible words, I was using â€˜badâ€™ to describe my favourite activityâ€¦

There have been many attempts at fusing psychology with sport, including running, most of them self-indulgent, many of them bogus. What I Talk About When I Talk About Running by Japanese writer Haruki Murakami, for instance, has been described as â€œthe most over-rated book since Ulyssesâ€ because of passages such as this:

Speddingâ€™s honest and earnest book is in an altogether different class. As Simon Turnbull recently suggested in the Independent on Sunday, â€œUK Athletics ought to buy a job lot and give a copy to every aspiring young distance runnerâ€.