There’s already been a shelf-full of books on Brian Clough. ERIC BROWN reviews a new volume which provides a different context

Brian Clough and Billy Walker are two giants of English football management bound together by a single club. 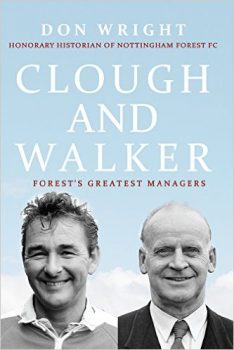 Walker served 21 years as Nottingham Forest manager while Clough took the Forest helm for 18 years, two spans unimaginable by today’s standards, where club bosses might last five years only if they are constantly successful. In the Football League during November 2016 one manager was sacked after 16 games, one after 10 games and another went after just five games.

Walker, an England captain in the 1920s, eclipsed Clough as a player. He played most of his career at the top level and broke Aston Villa’s goalscoring record during his 13-year spell as a regular first team choice there.

Many of Clough’s goals came outside the First Division but he, too, won England caps before injury cut short his playing career.

The pair not only shared goalscoring qualities but also their managerial philosophy. Neither believed in too much coaching. They relied on bringing in the right players who could gel with new colleagues and improve the team as a whole.

Clough’s idea of training frequently involved sending his players on a walk along the River Trent towpath, confident they would know what to do on match days. He said: “My players didn’t need to be told what to do. They did it as a matter of course. You don’t spend a fortune on a player then expect to teach him how to play.”

‘My players didn’t need to be told what to do. They did it as a matter of course’

Walker’s long-serving defender Billy McKinlay said: “Billy Walker was never a tracksuit manager. There was virtually no coaching. He always said if we were good enough for him to pick us for the team we were good enough to know how he wanted us to play.”

If only the game could be that simple today.

Walker and Clough simply relied on their personal judgement of a player, although in Clough’s case the input from assistant Peter Taylor was vital. It seemed to work with Clough in particular confident enough to dish out huge fees.

He made Trevor Francis Britain’s first £1milllion player then stuck him in the third team on a Saturday morning for his Forest debut.

Clough inevitably ended up with more silverware than Walker, who could only compete for the League title and FA Cup. Walker won the latter against Luton in 1959, his third FA Cup triumph with different clubs after succeeding with Villa as a player and Sheffield Wednesday as manager.

Both men got Forest promoted to the top flight but if Walker constructed the foundations of the modern Forest it was Clough who built the club into European giants. He loosened Liverpool’s stranglehold on the English game in the 1970s by winning the League then making Nottingham the smallest city in history to provide a European Cup-winning team.

His rag-tag team of other clubs; rejects and supposedly over-the-hill signings were somehow transformed into world-beaters. There was Frank Clark, written off by Newcastle but snapped up by Clough at 32, Kenny Burns, a Birmingham forward metamorphised into one of the best centre halves in Europe, John Robertson who revelled in the nickname “Fatty” and could hardly run yet regularly outfoxed the cream of Europe, and midfielder John McGovern who ran like a crab but held the whole lot together like sticking plaster.

McGovern played for Clough at Hartlepool United, Derby County, Nottingham Forest and Leeds. He even returned for a second spell at Forest. After such a loyalty record, you would expect Clough to have made a fuss of him when they finally parted ways. Not a bit of it. McGovern revealed in his autobiography that Clough did not even offer a handshake.

Clough, who ruled largely by fear, treated players with a mixture of kindness and cruelty. McGovern said: “There was no sentiment. People say I was Brian’s blue-eyed boy but every time he walked towards me I didn’t know if he’d shake my hand or bite my head off. At the end of 14 years there was no handshake from Brian or Peter.”

Yet Clough’s methods worked. Two European Cups are testimony to that. Plus the League Cups, the Simod Cups and the Zenith Data Systems Cup that brought his total to eight trophies – two more than bitter rival Don Revie at Leeds. But he was unable to get his hands on the FA Cup landed by Walker. In the League, a rampant Forest side suffered just three defeats in successive seasons.

Writing a joint biography of the two giants of Nottingham Forest history must have been fraught with difficulties. Walker’s life has already extensively been summarised in his 1960 autobiography Soccer in the Blood while Clough’s eccentricities and soundbites have been catalogued in a shelf-full of books including two autobiographies and at least three previous biographies.

Yet Don Wright, Nottingham Forest’s historian and a former editor of the Ilkeston Advertiser, has succeeded in weaving together an entertaining narrative and comparison of the two men for whom the epithet stalwart seems barely sufficient.