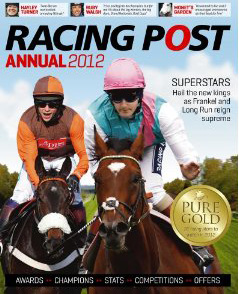 Until the last few weeks of “Whipgate”, it has been a good year for horse racing. Better probably than the directors of the Racing Post dared have hoped when they decided to launch a new publication, the Racing Post Annual.

Given the quality of the Post’s writers, not to mention the award-winning photographer Edward Whitaker, producing an annual like this was a good idea waiting to happen. One imagines that it will appeal not only to the paper’s core readership (which it counts at around 200,000) but also to those who don’t subscribe every day but who still have a passion for racing.

The annual certainly provides a vehicle to expand on the writers’ work and offers plenty of fresh angle and features.
Brough Scott’s piece on Frankel, “the horse of a lifetime”, leads off the publication. Scott enjoyed unrivalled access to Sir Henry Cecil’s stable in what turned out to be the most remarkable season in the trainer’s 42-year career. Again, timing is everything.

Besides features  on racing’s golden girl, Turner, Donald McCain on the Grand National and his upbringing (“I hope I made Dad proud”) and Aidan O’Brien and his jockeys, there is also plenty of offbeat material. Things like Strange But True, The Best of Twitter and the Internet, Quotes of the Year, and a “big quiz” for a start.

The Bet of the Year, of course, was Exeter plumber Steve Whiteley’s landing of a record Tote Jackpot that made him an instant millionaire.

It was the best punter story in recent memory and, yet again, just perfect for the launch edition of a newsy racing annual. Whiteley is interviewed by Nick Pulford, although we mustn’t forget some other black days for the bookies that are also covered here.

Racing Post writers pick their own highlights of 2011 and look forward to 2012 with their eyes on 32 rising stars. And, of course, there are those stunning images by photographer Whitaker.

It looks a winner all the way.