﻿ANTON RIPPON on a book, published this week, that traces arguably football management’s greatest partnership, Clough and Taylor. Except that this time, it is from Peter Taylor’s side of the story, written by his journalist daughter

Wendy Dickinson had long been disappointed at the way her late father’s role in a remarkable football story had been reduced. But when she saw him – 6ft 2in tall and, some would say, a rather handsome man in his prime – being portrayed in a film by a short, fat bloke, she decided to do something about it. So she sat down and wrote a book about his life. 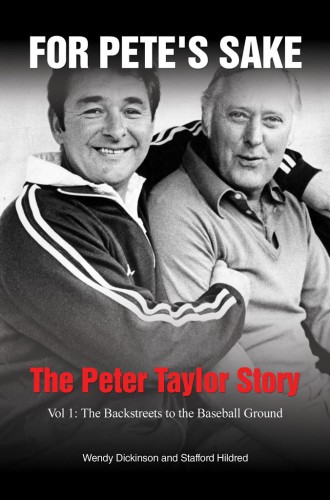 Dickinson’s father was Peter Taylor, the hitherto lesser-acknowledged half of a footballing partnership that brought unimaginable success to not one, but two provincial clubs for whom the glory days had seemed long gone.

The other half of the duo was, of course, Brian Clough. The film (of another book) was The Damned United. And the actor was Timothy Spall, better known for his portrayal of the gormless Barry in Auf Wiedersehen Pet and as physically removed from Peter Taylor as it is possible to imagine.

Dickinson, a former Derby Evening Telegraph news reporter who for many years worked as a BBC drama publicist and who now freelances, said: “Over the last 20 years I feel like my father’s role in the partnership has been diminished and when I came out of the cinema having watched The Damned United, I decided I was going to tell my side of the story and put my dad back where he belongs.”

And so she has, although her book For Pete’s Sake (self-published through Matador) is only part of the story. It takes Taylor’s life from his birth in the Meadows area of Nottingham in 1928, up to his and Clough’s sensational departure from Derby County in October 1973. A second volume, covering the further glories at Nottingham Forest is planned.

It is safe to say that when Taylor met a brash young centre-forward called Brian Clough at a pre-season friendly match at Middlesbrough in 1955, neither could have had any inkling of what lay ahead.

It led to a dressing-room friendship at Ayresome Park that blossomed into one of the most remarkable management partnerships the game has ever seen.

Of course, for Dickinson, there was a rare insight into it all. To her, the pair that everyone else knew as Clough and Taylor were simply “Dad and Brian”. So she would be sadder than most that, after 25 years and spectacular success together, they ended up falling out, never to speak to each other again before Taylor’s untimely death in 1990, at the age of only 62.

The two men played their football in an era light years away from the game today. There was a maximum wage – £20 a week when it was abolished in 1961 – and most players walked to the ground or caught a bus. Few owned a car.

In the close season, Taylor worked as a brickie and dreamed about becoming a top manager. His first job in charge was with Southern League Burton Albion before he joined up with Clough at Hartlepools United.

Len Shackleton, the former Sunderland star then working as a sports journalist in the north-east, recommended Clough to Derby, who were bumping along in the second tier of English football. Clough agreed, providing that he could take Taylor as his assistant. Five years later, the Rams were champions of England.

It enjoys contributions from several players signed by Clough and Taylor (it was Taylor who was the star spotter) including Roy McFarland, Alan Hinton, John O’Hare and Archie Gemmill.

More than anything, it is a very different kind of football book, revealing as it does the impact that ambition and fame had on a transient football family. It is a warm portrait, particularly when bringing out Taylor’s sense of humour, but it avoids any hint of idolatry for her father.

Dickinson said: “Dad and Brian were both absolutely obsessed with football. My dad would be out several nights a week watching games. His knowledge was just incredible.

“They were both proud and outspoken men … after they went their separate ways, people would ask me why, but I used to say they did well to last 25 years.”

For Pete’s Sake, The Peter Taylor Story: Volume 1, The Back Streets To The Baseball Ground by Wendy Dickinson and Stafford Hildred (Matador, £17.99) is available by visiting www.thepetertaylorstory.co.uk or from Mainstreet Media, 54 Main Street, Willoughby-on-the-Wolds, Leicestershire, LE12 6SZ, price £15 including postage and packing.