A racing punter’s relationship with a newspaper tipster is a sensitive thing. ANTON RIPPON should know

Later, I am looking for my bus when the tipster comes by again, this time heading for a Bentley in the company of a bookie and his assistant. It occurs to me that there is a flaw in this scenario. 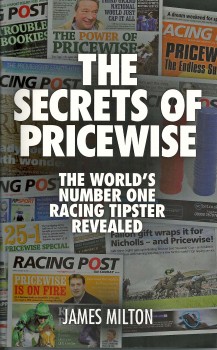 Now to a tipster of a different kind, one who has consistently delivered and whose story is told in a new book The Secrets Of Pricewise: The World’s Number One Racing Tipster Revealed.

Pricewise, of course, is the flagship tipping column of the Racing Post. That it has long wielded power in the British racing industry is underlined by the fact that in September 2005 the chief executive of William Hill, no less, blamed Pricewise for the bookmaker’s disappointing results.

“Pricewise tipped a winner for 10 weeks running and the Racing Post turned it into a ‘bash the bookies’ campaign … it could have been better if it wasn’t for him,” David Harding told shareholders.

That particular Pricewise was Tom Segal, “the Tominator” and the current guardian of the column. But there were two before him: from the column’s inception in 1987 there was Mark Coton, “the man who changed the face of tipping”; and from 1993 to 2001, Mel Collier, who recorded a profit every year.

Coton explains how it all started: “I was working in the marketing department at Ladbrokes and messed up an interview with Graham Rock, the Racing Post’s founding editor … midway through I realised that my chances of a job were disappearing into a black hole. So I decided to gamble. I told them that I wasn’t interested in what won 10 years ago but what would win tomorrow.

“As it turned out, I didn’t get the job. But we’d also done a written test and the story I heard is that Paul Johnson, the football tipster, saw my test and told them that they ought to rethink their decision … and one evening I received a telephone call from Graham, offering me a position on the bottom rung of the ladder as a junior writer.”

The book covers the early days of the Racing Post as it battled to establish itself against the Sporting Life that everyone assumed was creaking beyond repair and would fold, but which for some time fought a fierce rearguard action.

“People don’t change habits very easily – people weren’t just going to switch from the Life to the Post even if we’d been really good, which we weren’t at first,” Coton said.

Coton’s ambition to become a tipster was thwarted by his lowly status at the paper: “Originally, I was just a floater … the tipping was done in one corner and all the tipping jobs were taken, so I worked on the production desk under Francis Kelly, doing the cards and the form. After about six months I was thinking ‘I could be here for years’.

“Francis told me to read everything that Harold Evans [the former Sunday Times editor] had written about journalism. One thing Evans said was that a journalist is someone who makes a nuisance of themselves. There was a radical, individual streak running through people like Evans and Hugh McIlvanney … they did their own thing.”

So Coton made a nuisance of himself and wrote a tipping piece, even though he hadn’t been asked for one. It concerned a horse whose big price was, Coton said, a mistake by the bookmakers. The piece was published, the price shortened and the horse won. A seed had been planted and Coton put forward his idea for a tipping column.

It was a hard battle. In the days before the internet, before online gambling and computerised form, before even televised racing in betting shops, the Post’s attitude to tipping remained stoutly traditional.

In February 1987, Pricewise appeared for the first time and author James Milton tells the story of how it evolved. He explores the different methods of the trio who have in turn produced it for 25 years.

Segal’s methods can be surprising. He says that a trainer’s personality can play a major factor is his decision-making, and he also “likes horses that are perceived to be badly drawn”.

He also says: “Pricewise is for the man in the betting shop … the guy who wants to have a fiver each-way in the shop on a Saturday and if he wins he can pick up 50 quid and go for a curry with his mates instead of going home to the missus.”