In 1948, 10-year-old Len Thompson made out his mother’s betting slip for the Grand National before taking it round to the house of their local bookie’s runner in Chesterfield. Her selection, Sheila’s Cottage, became the first mare to win the race for 46 years, and at 50/1, too. 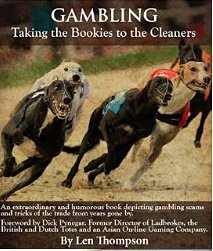 A year later he was back again with another of his mum’s Grand National wagers. This time the 66/1 shot Russian Hero came in a comfortable eight lengths ahead of its nearest challenger.

But a career in the Turf did not beckon for young Len who, at the age of 15 years and one week, was forced to leave grammar school because his family was unable to support him in continuing his education. Instead, a career in engineering ultimately took him to South Africa to work in gold and diamond mines.

But his interest in gambling did not wane. From the age of 14 to 17 he had also worked as lad at Chesterfield’s Wheeldon Mill dog track where his father was the official handicapper and where Len became aware of several methods of taking the bookies for a ride.

They were lessons that he put to good use. Now, 60 years later, he is sharing them in a new book Gambling: Taking the Bookies to the Cleaners.

This is the fourth book, on various aspects of his life, written by Thompson. A cousin of the late Morning Star and Sunday Times sports journalist Stan Levenson, Thompson told sportsjournalists.co.uk: “One of the main reasons I decided to write another book was to support the Labour Party who have vowed to reverse a ban on prisoners being sent books. Shadow Justice Secretary Sadiq Khan called the restriction ‘plainly ridiculous’. I agree and want to support all prisoners by supplying them with a free copy of my book in e-book format that the prison authorities are less likely to ban because it will not contain drugs, etc, hidden inside it.”

Thompson’s subject may well appeal to many of those held at Her Majesty’s pleasure: “The book primarily contains underhand methods of gambling used by working class punters who adopted scams and skullduggery to relieve bookmakers of their cash in the 1940s and 1950s when betting rules and regulations were not as strict as they are today.

“How to take the bookies to the cleaners? Well, that has been the aim of thousands of punters down the years. This memoir will tell you how it was done down Pottery Lane, Chesterfield, during those times, giving examples in quite a few differing circumstances – all true.

“Gambling was very much a way of life there, and the book includes a number of incidents which are extraordinary and, at times, humorous. The main scam is how two compulsive gambling brothers developed a foolproof system where every bet they placed was a winner. Over a three-year period they won a small fortune.”

Thompson’s book has a foreword by Dick Pynegar, a former director of Ladbrokes and of the British and Dutch Totes, who says: “Len’s perspective comes from an era where [off-course] gambling was illegal, cash only, with limited security, but – most important of all – widely loved by the working classes as both social entertainment and a potential means of getting a big win from a small outlay.

“He brings that era to life as he takes us through his Mam’s ‘pin sticking’ highlights, his Dad’s development of a manual database of handicapping and timings, and his neighbours’ creativity in parting bookmakers and unsuspecting moneymen from their wealth.

“What is remarkable about Len’s look back at an era which was more than a half-century ago is that while technology has changed to make everything slicker and faster beyond recognition, the same sharp people with the same sharp minds continue to pit their wits against the bookies of today. Long may that continue.”