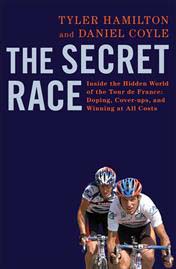 Just like this week’s SJA British Sports Awards, the contenders for William Hill Sports Book Award for 2012 was always going to offer probably the most rich and varied shortlist in the competition’s history.

The only safe bet is that, unlike the William Hill, Thursday’s event at the Tower of London won’t feature the name of Lance Armstrong.

For it is a book about the dark side – was there ever any other? – of Armstrong’s career which has won the literary award.

Actually, The Secret Race – Inside The Hidden World Of The Tour De France: Doping, Cover-ups, And Winning At All Costs, by Tyler Hamilton and Daniel Coyle (Bantam Press, £18.99) isn’t really about Armstrong’s career but about the effect the disgraced seven-times winner – can we still call him that? – of the Tour de France had on the career of another: Hamilton.

Hamilton, “the sort of everyman hero sportswriters used to invent in the 1950s: soft-spoken, handsome, polite and tough beyond conventional measure”, according to his co-author – was just another budding cyclist before he became involved with Armstrong’s US Postal Service team.

One of the William Hill judges, John Inverdale, said the book had “fundamentally changed cycling … It’s not a prerequisite of a book to change a sport, but this one did”.

This is the third cycling title to win the William Hill in its 24-year history, after Paul Kimmage’s confessional Rough Ride in 1989 and, ironically I suppose we can now say, Armstrong’s It’s Not About the Bike in 2000.

They beat off stiff competition from the six other books on the shortlist, on cricket, football, Ironman triathlon and TT racing, as well as, interestingly, a self-published book on squash.

Fibber In The Heat by Miles Jupp (Ebury, £11.99) tells the story of a man who bluffs his way into the press corps during England’s Test series in India. Claiming to be the cricket correspondent for BBC Scotland and getting a job with the Western Mail, which happens to be in Wales, Miles blags a press pass.

Alas, although finding himself rubbing shoulders with the likes of Gower, Botham and Hussain, he soon folds under the burden of his deceit, not to mention the heat.

That Near Death Thing – – Inside The TT: The World’s Most Dangerous Race by Rick Broadbent (Orion, £16.99) sees the author talking to four leading motorcycle racers, all of whom have remarkable tales to tell. They are the unsung heroes of motorsport: Guy Martin, tea-drinking truck mechanic and TV eccentric; Conor Cummins, battling depression and a broken body after falling down the mountain; John McGuinness, a legend in TT circles, who fights the ravages of middle age; and the wild child Michael Dunlop.

Running With The Kenyans: Discovering The Secrets Of The Fastest People On Earth by Adharanand Finn (Faber and Faber, £14.99) tells how the author moved his family, including three young children, to a part of the world that most of us would favour only with a wide berth. Finn, though, wants to learn from Kenya’s top runners. And that he does, improving his own running times as well as producing this book which is as much travelogue as sports title.

Be Careful What You Wish For by Simon Jordan (Yellow Jersey, £18.99) is the story of one man’s desire to own a football club. Apparently the book has proved a big hit with supporters of Crystal Palace, the club concerned, as Jordan pulls no punches about the people he met along the way of his great adventure.

The prose isn’t John Buchan, nor even Charles Buchan, but after you’ve become accustomed to constant use of the F-word, Jordan’s interesting tale races along.

A Life Without Limits – A World Champion’s Journey by Chrissie Wellington with Michael Aylwin (Constable, £18.99) tells how a Norfolk girl – a “sporty kid, swimming, playing hockey, running, but never excelling and always more interested in the social side of the sports scene” – became the world’s No 1 female Ironman triathlete, a four-times world champion, and world record-holder.

Shot And A Ghost: A Year In The Brutal World Of Professional Squash by James Willstrop with Rod Gilmour (Rod Gilmour, £9.99) is an honest account of someone who isn’t your usual sporting hero, or even your average Yorkshireman.

A militant vegetarian, lover of musicals, Morrissey, Oscar Wilde and Philip Larkin, an obsessive-compulsive with a constant need to wash his hands, James Willstrop went from the municipal courts of Pontefract, through crippling injury and personal despair to the world No 1 ranking. Patrick Kidd of The Times called it “a great insight into a young champion’s mentality”.