Lee Trundle did not have a Premiership football career but, says JANINE SELF, together with Chris Wathan, he has produced a premier calibre book

Harry Enfield would have a field day with Lee Trundle, who ticks just about every box when it comes to the Scouse scally stereotype. He was even a long-haired lover from Liverpool for a while.

Perhaps only a cheeky chappy like Trundle could have made a name for himself on the back of what, let’s be honest, was a pretty modest professional career which didn’t even start until he was 24.

Birds, booze, banter. That was the Trundle way as he bounced from Burscough to Chorley to Stalybridge Celtic to Southport to Bamber Bridge to Rhyl before Wrexham gave him his big chance.

As a non-League player, Trundle would go clubbing and pretend to be on Liverpool’s books to help his chat-up chances. As a professional, he didn’t need to lie.

Equally, he became the magnet for trouble-makers. The trauma he faced when he was falsely accused of rape makes riveting reading.

So many coaches and players saw a massive talent going to waste yet found their words of wisdom largely ignored. Not that Trundle gave a damn as he hit the bars after turning a trick or two on the pitch, including some spectacular goals. The fans loved him, so did the ladies – at one point he was going out with an Atomic Kitten, which isn’t half bad when you play for Bristol City.

Trundle never clicked at Ashton Gate. He left Swansea for the money but deposited his heart at the Liberty Stadium before he crossed the Severn. Last year he went back on loan – and that’s where an interesting autobiography morphs into a fascinating diary. 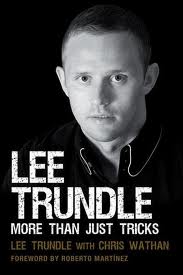 Co-writer Chris Wathan, one of Wales’s leading football writers, has cleverly plaited Trundle’s life story into his doomed attempt to re-join the Swans on a permanent basis.

It works a treat. Without realising it the reader is drawn into the “will he-won’t he” saga even though we know how it ends.

The result is a pacy, easy-to-read page-turner. No trundling at all. The player has plenty of anecdotes, is happy to confess to his misdemeanours and almost concedes that he could and should have done so much better.

These days he is playing at Neath, scoring goals for fun, and with another dream in mind. Trundle can’t wait to go back to Swansea – as manager.