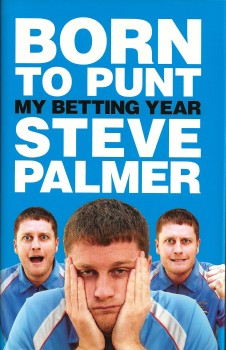 According to the jacket blurb of Born To Punt, Steve Palmer is that rare journalistic commodity – one that enjoys a large and very loyal following for his regular column in the Racing Post.

He is certainly right up there with his peers. On occasions, one might say, head and shoulders above them. He has twice won the SJA’s Betting Writer of the Year Award, in 2008 and 2009.

Again, according to his publishers, his The View From The Sofa column – in which he reviews the day’s television coverage – is a “must-read feature” in the Racing Post.

He is also a golf betting analyst, as well as a weekly diarist and daily blogger “with a cult following”. All in the Racing Post.

So we won’t be surprised that the publishers of this new book, which “brings the best of Palmer’s often hilarious anecdotes and stories together under one roof for the first time”, is… the Racing Post.

Alas, it isn’t a book that I enjoyed. But that is my fault and not Steve’s. I’m not a betting man, so there were bits that I didn’t understand. I’m not into the laddish thing, and from the latest decline in circulation in lads’ mags, far fewer others are today, too.

And although I enjoy an evening, or lunchtime, in the pub along with the best of them, I’m not an admirer of people who continually boast about how much they’ve had to drink.

So a book that presents “a man who bets, survives on a diet of beer and junk food … and lives a life that every lad dreams of” was always unlikely to appeal to me. And so it turned out.

To be fair, Steve also has a reflective side. After placing several bets on the Portugal Open golf, he spends the evening watching Dunkirk: The Soldiers’ Story on BBC2 and finds that the veterans’ accounts of their retreat from that bloody beach puts everything else into perspective. He finds it “a truly humbling experience” and realises that later generations “should be permanently dripping with glee” that they were born in relatively peaceful times. Well said, Steve.

The book could also have done with a little more editing here and there: his pal, Keith, guides him to an ancient castle “20 minutes’ walk from my house which I had no idea even existed”.

If you’ll forgive me, in an attempt to present both sides of the coin I’ll return to the publishers’ blurb to tell you more: “The book takes us on a Weymouth roller-coaster ride, from Palmer’s favourite park bench, via his local betting shops and pubs to the dizzy heights of a round of golf with Rory McIlroy and a Warriors’ game at Wigan.”

Unfortunately, I found myself not caring very much about any of it. But, as I said, I’m from a different planet, and there is no doubt that Steve’s book will appeal to his legion of followers among the Racing Post readership. For it is they that this is obviously aimed at and not at some old codger who’s only ever had one bet a year (on the Grand National, naturally) and who has yet to realise that, in 2011, you can get a drink after half past ten.

Who will be this year’s SJA British Sports Journalism Awards winners?

Can Palmer win for a third year? Fancy a bet on it?