The Racing Post has a rapidly growing stable of books. ANTON RIPPON reviews three of the latest 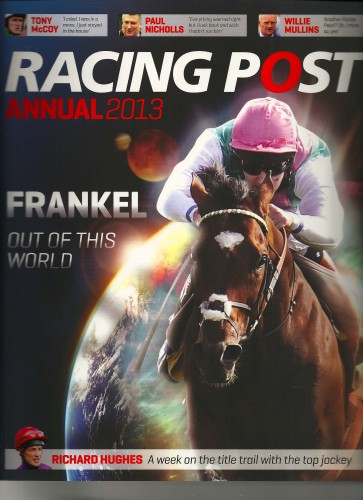 How good it was to open the Racing Post Annual 2013 and drop straight on to a feature on Great Britain’s 2012 Olympic success.

Nick Pulford’s piece on Tina Cook was a surprise inclusion in a publication obviously dedicated to the Turf. But, as Pulford comments, equestrianism was one of the surprise hits of the 2012 London Games, with gold medals for the show-jumping and dressage teams.

The 42-year-old Cook was at the centre of it all when everything rested on her and the veteran Miners Frolic after two-thirds of the eventing competition in Greenwich Park. Who needs reminding that a double clear in the show jumping phase secured silver for her team? It was a happy end to a year that had piled much personal sadness on Cook with the death of her father, Josh Gifford, the break-up of her marriage, and the near-death of Miners Frolic himself.

We said here last year that the Racing Post Annual was a good idea waiting to happen, and so it proved. The 2012 edition – the first – sold out, and 2013 will surely be just as successful.

Its pages are packed with interviews and features on the best stories from the racing year, all woven together with some truly stunning images by award-winning photographer, Edward Whittaker.

All the best horses are here – Frankel (“Four hundred years of selective breeding has not been in vain,” says Brough Scott), Camelot, Black Caviar, Big Buck’s and Neptune Collonges, and there are weighty interviews with Tony McCoy, Paul Nicholls, Nicky Henderson and Willie Mullins.

The best quotes and unusual stories are again entertaining features, and there are, of course, plenty of statistics. It is surely another winner.

The Racing Post’s publishing stable has been mightily productive these last few weeks, with books on two great horses.

Frankel: The Wonder Horse is constructed from reports, features and wonderful photographs that chronicled Frankel’s progress in the pages of the Racing Post.

Frankel’s record – 14 wins from 14 starts, including 10 at Group 1 level – speaks for itself. But the manner in which Frankel disposed of his rivals is what will linger in the memories of racing folk.  Frankel in full flight was a sight to behold and one that those who saw him in his pomp will never forget.

The book tells the complete story of this racing legend. But it is also the story of the shy, retiring Prince Khalid Abdulla, who owned and bred the horse; of Irish jockey Tom Queally, who rode Frankel in every one of his races; and of Sir Henry Cecil, whose involvement with Frankel confirmed the trainer back at the summit of his profession after years when his career appeared to be in terminal decline.

And then there is Kauto Star: A Steeplechase Legend.

It is widely accepted that Kauto Star is the best steeplechaser since Arkle, half a century ago. The only horse ever to regain the Cheltenham Gold Cup, and a scarcely credible five-time winner of the King George VI Chase at Kempton Park, Kauto Star has posted a remarkable record during eight seasons of racing in Britain.

This book looks beyond those impressive statistics. It tells the story of the rivalry with stable companion, Denman, his next-door neighbour in the Somerset yard of trainer Paul Nicholls; the early-years fallibility of making at least one major blunder in a big race; and the apparently terminal slump in his form as he reached veteran stage, which only made his resurrection more glorious.

Again, the book looks at the horse’s story as it unfolded through the pages of the Racing Post, including yet more stunning images from the paper’s photographers.

All in all, a great hat-trick from the publishers.