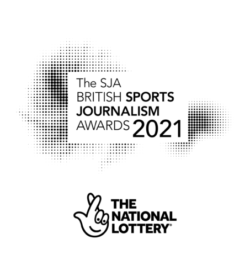 The Doug Gardner Award honours a member of the SJA who has made an outstanding contribution to sports journalism and the association. Jeff Stelling, who started his career on the Hartlepool Mail, will stand down from Sky Sports flagship Soccer Saturday at the season of the season, after nearly three decades telling the story of our weekend afternoon. Here is his award citation.

There are very few broadcasters – especially those who specialise in working in live television – who look and sound as if they belong in the studio, that they’re completely at home in that environment. A lot of people here will think of Frank Bough maybe – or Des Lynam. The older ones among us might consider Cliff Michelmore.

Well, the recipient of this year’s Doug Gardner Award is another. He’s a natural – informed, opinionated, quick-witted, clever and sharp.

Those who’ve worked with him over the years – and he’s been around a long time – also call him hardworking and loyal. He’s a council house kid who learned this craft of journalism on his local paper and his local radio station. He moved to the capital to read the sports news at LBC and then BBC Radio One and Sport on 2 before making his mark at Sky. Someone who knew him way back when said: ‘He’s done the biggest jobs in sport without an ounce of ego.’

He’s always counted his blessings, taken nothing for granted and learned from those around him.

He once recalled those early days in an interview with a local paper.

He said: ‘To write stories, among other things, about my local football team and get paid for it certainly wasn’t a bad job for a council house kid from the town who lived and dreamed the club.’

A fitting way to end at @ParkPlazaHotels Westminster. We hear from your Doug Gardner Award winner, the phenomenal @JeffStelling 👏 Thank you for a great night everyone #SJA2021 pic.twitter.com/izfrI5hCwl

And the secret of his success lies in advice he offered to young sports reporters. He told them: ‘I was early twenties once and thinking: Where does this go to? From local newspapers – which is where I was – to national TV? The answer is: you make sure you know your stuff. Do all your preparation – you might not use any of it but make sure you’re prepared for absolutely anything. And be honest. Be truthful. Be opinionated. Say what you think. And never, ever be discouraged.’

He’s known for all those things now and that’s why he’s the best at what he does. He’s done all manner of things on television – even quiz shows. But sport is his thing. He even won the SJA Sports Presenter of the Year for five years on the trot from 2005 to 2009.

And he’s found the time to make a difference with his various long-distance charity walks, raising hundreds of thousands of pounds with his March for Men for Prostate Cancer UK.

It’s his birthday next week – it’s quite a big one but he’s not ready to retire. He’s recently quit a job he’d done for almost three decades, claiming it was the best job in the world. He said it was time to give someone else a go.

He loves Hartlepool United, James Brown and enjoys a rant about anything, from the joys of living in the north-east to the inadequacies of the Honours system… I’ve heard him described as ‘one of the Beautiful People’ – but that’s only because it’s the name of the horse racing syndicate he’s in, with – I might add – people he worked in radio with more than 30 years ago. See what I mean about loyalty?