Voting is open for the 2019 SJA British Sports Awards, with members encouraged to cast their ballots for their Sportsman, Sportswoman and Sports Team of the Year. In his latest column looking back at the history of the awards, PHILIP BARKER charts the emergence of new categories…

It is fully 70 years since we first recognised the Sportsmen of the Year. There were five winners in 1949, and a decade later, our first Sportswoman of the Year.

We were then known as the Sports Writers’ Association, and our awards were the first of their kind.

By the time we reached our 30th year in 1978, chairman Alan Hughes mused…

The world of sport is now proliferate with polls. It could be argued that they have been devalued. If they are, the fault is with the imitators and not the SWA, who were there first.

Our generous sponsors have made sure our awards have gone from strength to strength. The spirit of sport, social change and awards by our President, Chairman or Chairwoman… yes, in 2019, our awards really do have all bases covered.

We led the way by launching an award for disability sport in 1963, named after our long-serving chairman Bill McGowran of the Evening News, whose “cheerful gregarious personality caused him to be affectionately regarded”.

The first recipient was Dick Thompson, who won decathlon at the Commonwealth Games for paraplegic athletes held in Perth.

In 1964, para swimmer Valerie Robertson (nee Forder) was the first female winner after returning from Tokyo with swimming gold and medals in archery, athletics and fencing. Scottish Disability Sport described her as the “oustanding all-round wheelchair athlete of her generation”. Later, she became a key figure in developing para bowls and curling.

Today, annual trophies for men and women are awarded in close consultation with the British Paralympic Association. Our 2013 recipient Hannah Cockroft completed a unique double when she won the SJA Sportswoman of the Year in 2017.

In 1966, there was of course one outstanding favourite for ‘Team of the Year’ – except we didn’t have such an award. The only option back then was to vote for the team as ‘Sportsman of the Year’.

Olympic long jump champion Lynn Davies, our 1964 winner, had added European Championship and Commonwealth gold in 1966 and was initially placed first. Yet as our former chairman David Hunn recalled…

Detailed analysis showed that the England team had been given 43 first-place votes; [Bobby] Moore 42; and Davies six. Yet Davies headed the points scoring because of his large number of second-place votes. Interference was deemed necessary; the committee amalgamated the football votes.

Bobby Moore and the team had another trophy to join the ‘Jules Rimet’.

Calls for a team award were eventually answered in 1970. That year, the women’s relay squad broke the 4 x 800m world record at the British Games, held in Edinburgh a few weeks before the Commonwealth Games. Peter Hildreth in the Daily Telegraph wrote…

Rosemary Stirling ably led off the British team but handed over in second to Sheila Carey, who passed a substantial lead to former WAAA champion Pat Lowe. [Carey] maintained the lead and passed to Olympic silver medallist Lillian Board for the last leg, which ‘consolidated the position admirably’.

Tragically, Board was unable to attend our awards evening having been diagnosed with bowel cancer. She died later that same year, aged just 22.

In 1974, we introduced a trophy for ‘Services to sport outside the field of competition’, named in honour of Jim Manning, always bylined ‘JL’ Manning in the Daily Mail. His style was summed up elegantly by Robin Marlar as “vintage pepper”.

The first winner in a distinguished roll of honour was the recently deposed FIFA President, Sir Stanley Rous. In 2007, the award was shared by Judy Murray, Anthony Hamilton and Enzo Calzaghe – all parents of world beaters, they were popular winners. The recipient in 2012 was Lord Coe, some 30 years on from when he had been a regular award winner during his athletics heyday.

In 1979, Hunn hailed David Bryant, the first winner of our ‘Outstanding Performance’ prize, as “a Gentle Green giant”. Bryant was quite simply the best bowls player in the world at the time…

He is a man of concentration, precision, and firm conviction and the last 12 months, he admits modestly, have been rather exceptional. 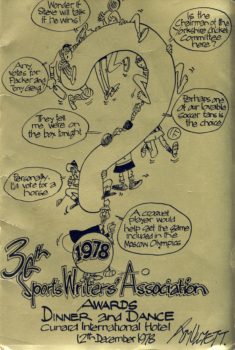 The award Bryant received would in time be named in honour of Pat Besford, one of the pioneers of women in sports journalism, and the first to lead our association. She was described in one SWA dinner menu as our “awards supremo”. An outstanding authority on swimming in a career with the Daily Mail and then the Telegraph, she was also our liaison officer with the British Olympic Association for many years.

Snooker dominated when our ‘International Newcomer’ award made its bow in 1979. Terry Griffiths beat Dennis Taylor to lift the world title. At 31, he was a relative latecomer to elite international sport. As Peter Jackson discovered, his first engagement after his victory at the Crucible was for the princely sum of 75 pounds. Long before he found fame, he’d been signed up for a personal appearance at the Royal Antediluvian Order of Buffaloes in Kilgetty – and honoured the commitment.

“It’s fair to say we have pulled off the sports scoop of the year,” said club entertainments officer Don Cole, as Griffiths played to a packed house.

The award is named after Peter Wilson, founder member of our Association. He was famously known as ‘The Man They Couldn’t Gag’ – and is also, possibly, the only member to have his notebook confiscated by the Gestapo!

Book your table at the British Sports Awards