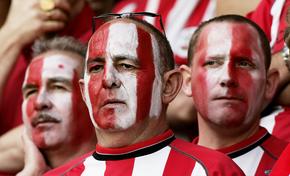 The football club’s ban, introduced just a month ago ahead of the start of the League 1 season, was opposed by a broad coalition of media groups, including the Society of Editors, The Sun, Daily Telegraph and the Sports Journalists’ Association.

SJA member Robin Jones made a significant financial sacrifice over the club’s proposed ban, when his company Digital South decided to decline Southampton’s offer of syndicating “approved” pictures from the official club photographer.

It appears that Southampton has had a re-appraisal of its policy with the media, having also allowed reporters from the local newspaper The Echo to attend its regular pre-match briefings.

Southampton travel to Swindon tomorrow. The first home game when press photographers are expected to obtain accreditation in a routine manner will be for the league match against Colchester on September 18, which may also prove to be the first home fixture for whoever is appointed as Southampton’s new manager.

The Sun has refused to mention “the South Coast club” by name since the ban arose, while other newspapers have used archive pictures, cartoons and Subbuteo “reconstructions” to illustrate their match reports.

Online accreditation applications should now be possible under the Football DataCo system.