Prudential RideLondon is the UK’s biggest festival of cycling with 70,000-plus cyclists participating in four events over the weekend of August 3 and 4.

The online application system for media accreditation for Prudential RideLondon is open at www.prudentialridelondon.co.uk/Media/Accreditation.htm 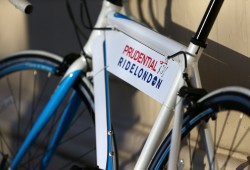 The four events are:
Prudential RideLondon FreeCycle, 09:00-16:00, Saturday 3 August:
Family fun ride for 50,000+ around an eight-mile circuit of closed roads in central London passing some of the capital’s most iconic landmarks, beginning with an attempt on the Guinness World Record for the longest single parade of bikes.
Prudential RideLondon Grand Prix, 17:00-19:30, Saturday 3 August:
Criterium racing on a 1.3-mile route around St James’s Park (Start/Finish in The Mall) for handcyclists, youths and pro women. Already confirmed are the GB quartet of Laura Trott, Dani King, Joanna Rowsell and Elinor Barker.Prudential RideLondon-Surrey 100, starting from 06:00 on Sunday 4 August:
100-mile sportive for 20,000 amateur riders from Queen Elizabeth Olympic Park out into Surrey and finishing on The Mall in a variation of the Olympic Cycling Road Race route.

Prudential RideLondon-Surrey Classic, starting at 12:45 on Sunday 4 August:
150 of world’s top men racing over 140 miles from Queen Elizabeth Olympic Park, out into Surrey including three circuits of Leith Hill and finishing on The Mall.