The day war broke out… ANTON RIPPON vividly recalls how the 1939-40 football season became the season-that-never-was, as England’s footballers went off to war

There should have been plenty to talk about as football supporters headed for the exits on September 2, 1939. Blackpool had beaten Wolves 2-1 at Bloomfield Road to lead the First Division with maximum points. Ted Drake had scored four times in Arsenalâ€™s 5-2 win over Sunderland. In the Second Division, Newcastle had put eight goals past Swansea. In the Third Division South, Bournemouth had scored ten against Northampton.

Yet on the trams and buses taking fans home for their tea 70 years ago, no one said very much.

It was the same in every dressing room. At the Baseball Ground, the Derby players, who had just defeated Aston Villa decided to meet again that evening in a local pub, to discuss what the future might hold. The mood of the Charlton players who had beaten Manchester United 2-0 in a tedious game was not helped by the sight of barrage balloons flying over The Valley in south-east London.

At Highbury, where the kick-off had been put back for two hours due to traffic congestion as London’s first evacuees left the capital, the atmosphere was especially subdued. Even Drake, never short of a few wisecracks, had little to say, despite his four goals. For once, the result of a football match seemed unimportant.

The previous day, Hitler’s Germany had invaded Poland. Military service had been made compulsory for fit young men between the ages of 18 and 41 â€” which, on the face of it, meant all professional footballers â€” and, for the second time in a generation, a world war appeared inevitable.

At 11 oâ€™clock the following morning, the defeated Sunderland team gathered around a wireless set at the Russell Hotel, half a mile from Kingâ€™s Cross, to hear Prime Minister Neville Chamberlain announce that Britain was indeed again at war with Germany. Raich Carterâ€™s first thoughts were of how they would get back to Sunderland. Would the trains still be running now there was a war on?

In his autobiography, Arsenalâ€™s captain and England international, Eddie Hapgood, recalled: â€œThe boys were quiet in the bath. Quietly we slipped away, with no heart, even to talk of our big win. On the Monday morning, with the war 24 hours old, I walked into the ground. Workmen were already there, with pneumatic drills roaring, making air-raid shelters. Highbury was putting on its war paint.â€

The football league season of 1939-40 was unique, the only one ever to be started but not finished. On the second

Saturday of a new season, League football shut up shop. In its place arrived a hybrid game of guest players, ground sharing and regional competitions, although some of the matches were hardly competitive and many bizarre results were in store for Britainâ€™s football fans.

In December 1939, for instance, Norwich City entertained Brighton in the South Regional League. The visitors turned up with only five men. A Norwich reserve plus five spectators were recruited to complete their team, the criterion for selection based not on footballing ability but on possessing the correctly sized feet to fit the available boots. Not surprisingly, Norwich won 18-0.

On the other hand, some clubs found themselves with an abundance of talent. On occasions, Aldershot famously fielded an all-international team thanks to the pre-war professionals now stationed in the garrison town. Alas, some fans got used to it and were disappointed when their team was not stuffed full of big names.

Retired policeman Arnie Grace, at the time a young Derby County amateur, recalls: â€œWhen the names of local players were announced, there were groans and boos from spectators wanting to see the stars.â€ Sometimes team-mates were disappointed too. â€œRaich Carter wanted a mate from his RAF camp to play, but Derby insisted on me. Raich was furious and spent the whole afternoon making me look a fool.â€

Spectators remained stoical. The opening game of the 1940-41 season at The Valley took place during the Battle of Britain. With only 60 seconds remaining, and Millwall leading Charlton 4-2, the air-raid warning sounded. The raid was a heavy one with shrapnel from nearby anti-aircraft guns falling on the stadium. The 2,000 spectators took cover. When the all-clear was sounded, the game resumed and the final minute, plus a little injury time, played out.

Many footballers who joined the army did little more than continue to play football â€” â€œPT commandosâ€ was the jibe directed at them by some fighting troops â€” but others were in the front line. Bill Jones of Liverpool â€” grandfather of Rob Jones, who played for Liverpool and England in the 1990s â€” won the Military Medal for rescuing comrades under fire during the Allied crossing of the Rhine; Villaâ€™s Mush Callaghan, then a policeman, was awarded the BEM after rescuing several injured people during an air-raid on Birmingham; Halifax Townâ€™s Tom Barkas, an RAF corporal, gained the BEM after tackling a blazing ammunition lorry and a petrol bowser during a heavy air-raid on Malta. There were dozens of others.

Nearly 100 professional players made the ultimate sacrifice. In December 1943, Lieutenant Harry Goslin, a pre-war star with Bolton Wanderers, was mortally wounded serving with the territorial 53rd Field Regiment of the Royal Artillery in Italy.

In September 1944, Leeds and Englandâ€™s Eric Stephenson died fighting as a major in the Gurkha Rifles in Burma. Peter Monaghan, who had featured in Bournemouthâ€™s 10-goal hammering of Northampton on that last day of peace, was killed while serving with the Highland 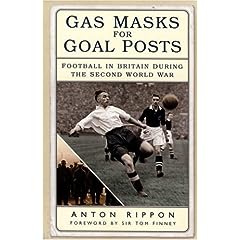 Light Infantry as the Allies advanced through Holland in January 1945.

Seventy years ago this week, Britainâ€™s footballers were facing far greater tragedies than a missed penalty.

Anton Rippon is the author of Gas Masks For Goal Posts: Football In Britain During The Second World War (The History Press) available from Amazon: click here to order