VIEW FROM THE PRESS BOX: Back from the outstanding Berlin athletics world championships, STEVEN DOWNES expresses concern about the low priority given to the written media’s access to athletes

The Mixed Zone is an evil, smelly, barging zoo of a place.

In the past, I have spent whole weeks trapped in these modern dungeons, within touching distance of world-class sport, yet condemned to watching most of it on television as I waited for the newest of champions to emerge and share their pearls of wisdom with the world.

But venturing into the Mixed Zone in Berlinâ€™s Olympiastadion at the athletics world championships last week, and there, tucked underneath where the VIPs were seated, the written pressâ€™s Mixed Zone was spacious and well-organised, and virtually empty.

Why? Because there were so few athletes to mix with.

The written press have long ago been relegated in importance by event organisers behind rights-holder broadcasters, in TV and radio. But in Berlin, even non-rights-holder TV news stations had their own Mixed Zone before the written press. Not satisfied with that (and worried that their reporters might have missed the obvious question?), even then they would send their ENG cameramen round to the written press area for a second soundbyte, and for their cameramen to wreak havoc on the hacks who had been waiting so patiently.

The written press seem to be regarded as being so far down the media food chain as to be entirely unimportant.

On the night of Usain Boltâ€™s first stunning world record, when Jessica Ennis won the heptathlon and Valerie Villi the womenâ€™s shot, some of the medallists were diverted by officials away from the written press Mixed Zone, only being made

available to reporters in hastily re-arranged press conferences late into the night, long after the events had been completed.

There were several events, including the womenâ€™s 400 metres, Christine Ohuruoguâ€™s event, where the medallists never even made it to the Mixed Zone at all. For the controversial womenâ€™s 800 metres, the champion, Caster Semenya, evaded the written press zone and was given a free pass from the press conference on the night, too.

Usain Bolt saves the Worlds
After Boltâ€™s 200 metres world record, it was more than two hours â€” and long after first edition deadlines for most British newspapers, if not the rest of Europe – before he was available in the post-event interview tent.

Once there, of course, Bolt was tremendous value. He is 23 years old and he is already developing a stand-up routine worthy of the Edinburgh Fringe.

But if Usain Bolt really is to save the Worlds, then the â€œmereâ€ scribes of the written media need prompt and timely access to the great man, and his rivals and fellow athletes, lest we risk that the only public questioning of him being via television and radio.

At the Beijing Olympics, written media from Europe and America had time on their hands as far as deadlines were concerned. But in 2012, in London, Mixed Zone service will be critical, and speed will be of an essence for European newspapers, their offices at least one hour ahead of British Summer Time.

Even in this digital age, there are some people out there who do not always find television coverage quite up to the mark.

Judging by the fulminating coming from the Gloucestershire living room of the SJAâ€™s Treasurer, Randall Northam could write and publish a book of the shortcomings of the broadcast interviewers. He did not quite say â€œBring back Sally Gunnell!â€, but he was deeply unimpressed with the BBCâ€™s trackside questioners.

As, indeed, were we journalists based in the stand or waiting in the

Mixed Zone, when via the German TV feed, we glimpsed one blonde British â€œjournalistâ€ stopping Bolt in the radio zone in order to get his autograph. Where is Charlie Sale when you need him?

Officials from world governing body the IAAF were sighted but rarely in the written pressâ€™s Mixed Zone; an official of AIPS was seen briefly on Wednesday, but that seemed less about inspecting the arrangements on behalf of his members, and more to do with a far greater purpose, to dole out invitations to the organisationâ€™s expensive bun-fight with its usual photo-opportunities with the stars for its president.

AIPSâ€™s track and field commission has rarely met in the past two years to discuss such matters. Gianni Merlo, the AIPS president, sits on the IAAF press commission.

Merlo used the AIPS website to heap praise on the local organising committee: â€œVery elegant tent for the press center, with a lot of space and every place was also equipped with cable internet and wifi, all free of charge. The same in the stand on the tribune. Very good condition and for the first time this full service internet free. They did really a good work and we thank also the IAAF communication deperment that it is very efficient.â€

So thatâ€™s alright then.

We at the SJA, at least, will be having urgent talks with LOCOG over the provision of wired internet access at the 2012 Games and to seek a workable compromise that endeavours to give all sections of the media a fair opportunity to access competitors.

â–¡ So chirpy and helpful, and all in perfect English, were the Adidas-uniformed young helpers at the airport on our arrival, that the immediate thought was a worry about the equivalent reception visitors might expect when arriving at Heathrow or Gatwick in 2012.

In Berlin, arriving journos were led to a coach, which took us to the stadiumâ€™s accreditation centre, where I was â€processedâ€ within a few minutes, before getting on to another bus for the journey through the city to the hotel.

But that was nowhere near as impressive as the personal service (no, not that sort) enjoyed by The Doyen, Neil Wilson, who had the benefit of a chauffeur-driven Toyota Prius (oh so green) from door to door.

â–¡ There was quite some emphasis placed on staging a more ecological championships, with ceremonial tree planting and the cancelling of the anticipated media buses between press hotels and stadium. The excellent S-Bahn service sufficed.

There was even a symobolic flower pot with seeds in the obligatory freebie bag.

But that was about where the Berlin championships’ green credentials started to break down. Boris Johnson please note: the requirement to use public transport applied to journalists, not to the hundreds of sports officials gathered in the city, who would still shuttle between 5-star hotels in air-conditioned coaches or cars.

And together with the flower pot, there were a dozen pamphlets and papers in the championship bag, most expounding the tourist delights of Berlin, and all destined immediately for the bin of the hotel room. A single guide to London, and a tourist map, would suffice. 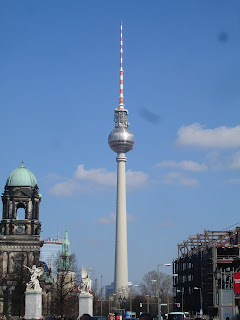 guide was a first: it included guidance on how to sneeze properly to avoid spreading swine flu.

â–¡ What is it about official press hotels and internet access, though? Before the media centre opened, getting access to the web required re-arrangement of the bed in the room at the Park Inn on Alexanderplatz to check the cabling, and an 18 euro daily charge.

Alexanderplatz, right by the East German TV Tower, is an ugly shambles of 1960s and 1970s shopping centre architecture, not dissimilar from Croydon. Home from home, then.

How many press hotels, though, have stickers on the windows of rooms telling guests not to be alarmed if they see people falling groundwards? The 36 storey Park Inn has weekly “base jumping” sessions, where you can jump off the edge all for just 99 euro, a tempting thought after a couple of nights in the Olympiastadion’s Mixed Zone.

â–¡ The Berlin track’s deep blue colour was done at the request of tenant football club Hertha Berlin, to match the team’s colours. What chance alternate lanes of claret and blue being laid down in London’s Olympic Stadium to help persuade nearby West Ham to move from Upton Park?

â–¡ On the final night, Usain Bolt threw a party at a Berlin nightclub taken over by the Jamaican team sponsors, and dubbed “Yaam” for the occasion after the world’s fastest man’s bright orange racing shoes.

The great man, renowned for his dancing after his world record victories, even invited the Berlin championships press corps – in marked contrast to one predecessor, Linford Christie, who used to ban some reporters (oh, alright then, me) from his press conferences.

However, don’t go thinking that the cost of the massive party was all paid out of Bolt’s $200,000 world record bonuses.

Because of the sprinters from Jamaica, sponsored by Bolt backers Puma, Berlin was the first world championships or Olympic Games in more than 30 years where the dominance of Nike and Adidas sportswear brands was seriously challenged.

â–¡ Until the middle of Sunday afternoon, the BBC had interviewed every British medallist in their trackside studio at Berlin’s Olympiastadion.

But they declined the opportunity to interview the men’s 4×100 metres bronze medallists who had won bronze. Why?

They were too busy interviewing Berlino, the bear

mascot of the championships.

â–¡ And a new track for David Welch, SJA committee member and one-time Daily Telegraph sports editor. He was in Berlin as the commercial agent for Lisa Dobriskey, pictured right, the winner of the silver medal in a controversially physical 1,500 metres final on Sunday.

Welchâ€™s management company already has several sports journalists on its books, and Elena Baltacha, the tennis player. But Dobriskey is the first track athlete that Welch has taken on for commercial and media work.

Dobriskey has already been booked to attend as a guest the annual SJAâ€™s British Sports Awards on December 9 â€” just three days before her wedding â€” and she is likely to be joined at The Brewery by Britainâ€™s Berlin gold medal-winners Jessica Ennis and Phillips Idowu.