Racing journalist Sean Trivass answers the Questionnaire, on Dubai, Kieran Fallon and Martin Dwyer, and Everton’s European Cup triumph (read on, all will be explained…)

Tell us about your involvement with the SJA.
I joined the SJA about five years ago, and have met some interesting people when I have managed to attend the social events headed of course by Trevor Bond, who has worked tirelessly since the day I met him, in an official capacity or otherwise. His infectious 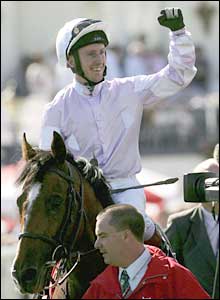 enthusiasm rubs off on everyone who meets him (where does he get the energy?), while I am delighted to see some recent efforts via the website regarding work opportunities which is something I felt was lacking when I originally joined.

Name your greatest sporting hero, and why.
Martin Dwyer, a top jockey and nice guy who has no delusions of grandeur despite being about as good a jockey as there is today. Coincidentally he is also an Everton supporter, rode the Derby winner this season (as pictured), yet is still not a household named for some reason but doesnâ€™t seem to give a hoot as long as he can boot home the winners.

His ride on Phoenix Reach in Dubai 2005 was as good as you will ever see yet went unnoticed by most of the sporting press – so frustrating.

What was your first sports journalism assignment?
Starting off in an office I was cajoled and bullied in to putting my racing knowledge to some use with the Crawley News, where I stayed for a few years while being paid a pittance until they

decided to cut my wages and I left â€“ for the equally generous Crawley Observer.

John Terry or Steve Gerrard? Well, I am a maniac Everton supporter so no contest, John Terry (left). Straightforward, hard working, patriotic – an ideal captain, though I do wish he would stop arguing with referees, which is something I would personally like to see stamped out of the game.

What has been your most memorable/enjoyable assignment during your career?
Covering racing’s Dubai World Cup is always a pleasure, with the best horses in the world backed up by five-star hotels, great service and, of course, decent weather in March, which is always a bonus. The facilities for journalists are as good as anywhere I have been, and when compared to America and the Breeders Cup â€“ well, no contest.

What is the latest task you have been working on – was it good, bad or indifferent?
Well I work daily for living legend Alan Brazil, writing for www.alanbrazilracing.com, so life is never dull, while I have been helping ex-jockey Steve Smith-Eccles with his new website recently, so I am always busy and there is always something to learn in this game.

What is really the worst thing about your job?
The hours are certainly the biggest problem as there are never enough in the day, while the wonders of e-mail, mobile phones, and Blackberrys mean I am expected to be on call 24/7. I donâ€™t really mind, but sometimes I would like a little time with the ones I love.

If you did not work on sport, what do you think you might be doing?
Well I suppose the obvious answers are other journalism or PR, but in reality, who knows? Probably working in an office or McDonald’s, I suppose.

Red Rum or Desert Orchid? Very funny. Well, I suppose it has to be Desert Orchid for his ability to win different races over various distances at different tracks though Rummy will always be remembered for his amazing Aintree exploits. Though he was pretty hopeless anywhere else.

Does any of your family have any involvement with sport or journalism (or both)?
With the exception of the occasional jolly, then no, afraid not, though I think my boys see I have a decent lifestyle and wouldnâ€™t mind following in my footsteps when they finish their education.

What’s your dream holiday? I really liked Western Australia with the weather and fabulous food, but have always fancied racing in Hong Kong so if anyone out there wants to send a freelance…

What sports event would you most like to attend as a spectator?
Everton versus Real Madrid in the Champions League Final 2008 please â€“ we can all dream.

Piggott or Fallon? Fallon without a doubt, though whip rules mean you are not really comparing like with like. Both were awesome in their own times but Fallon, pictured right, is more my man and I am desperately sad to see him having to sit out riding in this country, which is no good whatsoever for the sport I love.

Which colleagues or managers have been most influential or helpful in your career, and how?
Alan Brazil has given me the faith in my abilities to pick winners, while jockeys’ agent Gareth Owen has always had faith in me for many years and has been influential in my career.

What has been your favourite sports-related movie?
Pharlap â€“ just watch it and cry, because I certainly did.

What would be your first choice of car?
VW Golf V5 â€“ I have one and I love it. Sports cars are fine, but where do you park them?

Which sports journalist’s work do you look for first (and why)?
Alan Lee in The Times â€“ he epitomises everything I would like to be, given a bit more talent.

Wenger or Mourinho? Wenger â€“ less of an attitude problem and years of success, not all of it bought with a blank cheque.

What advice would you give to anyone wanting to enter the profession?
Prepare to work hard and need the breaks to be a success â€“ it isnâ€™t easy but it is rewarding in other ways than money (personally). Enjoy what you do and the words will flow â€“ and never cover a subject or sport you donâ€™t really understand â€“ it shows.

Sean Trivass is a freelance who is available for work and can be contacted at sean.trivass@blumon.com.