Support your team? But does your team support you? NORMAN GILLER’s disappointed at some of sport’s boo-boys, but reckons that Premier League clubs should be doing more to help their supporters

To boo or not to boo, that is the question after the spiteful jeering that hit Rafael Nadal when he took an injury timeout in the Australian Open against eventual champion Stanislas Wawrinka at the weekend.

Nadal is one of the most committed and determined competitors I have ever seen in any sport, but this did not stop the Melbourne spectators slaughtering him when he went off for treatment for a back spasm.

It was a form of mass slander, virtually accusing Nadal of cheating to try to stop the tsunami of winning shots coming his way from the hugely impressive Stan, the new man on the block.

Neil Harman, The Times court correspondent who has seen it all during his wide-ranging sports reporting career, tweeted: “Those who jeered Nadal on his return should be shame-faced.”

I have watched the great Australian public dishing it out to the England cricketers during their humiliating tour Down Under, egged on by an Aussie media that takes no prisoners.

But it’s not just an Aussie thing. There is a new generation growing up who think booing and jeering their own team is the thing to do if players are not meeting the standards that they demand.

Shortly before he was axed, Tottenham manager Andre Villas-Boas was unwise enough to attack the Spurs supporters for booing their team. It didn’t take long before he was shown the door.

There has always been fans ready to let their players know when they are not performing properly, but these days there’s a new nasty edge to the insults. At times, you can detect what borders on hatred coming from the mouths of the persecutors.

I have never booed a player in my life, and I don’t see how it can be called supporting your team when you are savagely criticising the players wearing your team’s colours.

But a confession: it is more than 50 years since I put my hand in my pocket to watch any sport. I have been a pampered pressman in all that time, with one of the best seats in the house and showing presumed neutrality.

I wonder if I would join the booing mob if I were coughing up £45 for the privilege of watching a match? 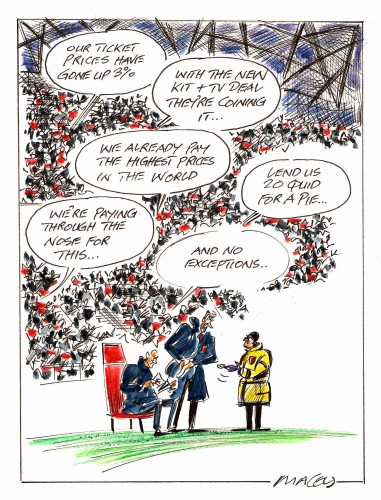 Even more disgraceful than the booing by the fans is the prices the fans are being charged to watch Premier League football. With so much money pouring into the game from multi-billion-pound television deals, the clubs should be forced to cut the admission fees, particularly for younger fans.

In the old days dads took their sons to matches, and that is how their club loyalty was born. Now the prices are too prohibitive and a whole generation is being lost to the game.

Too much money is going into the pockets of the players (and their agents). When I first started reporting (violins, please) the most footballers could earn was £20 a week. That was unacceptable Slave Soccer.

Now it has gone too crazy the other way, with some players pocketing more than £100,000 a week. So much for financial fairplay.

I would like to see the clubs reintroduce a maximum wage, say £50,000 a week, with all the money saved going towards bringing down ticket prices.

The counter-argument usually put up by the establishment (and the agents) is it will drive away the top foreign players. But where will they go? Just in case you haven’t noticed, clubs worldwide are financially strapped.

Let’s get fair-trading for the spectators. I will fully understand if the crowd start booing the directors for fleecing them.

MY FAVOURITE AMERICAN sporting event of the year – the Super Bowl – is getting our sportswriter brethren in the States hot under the collar.

Virtually every American newspaper I read online is asking: Why is this showpiece event being staged at an uncovered stadium in the north-east?

The forecast for Super Bowl Sunday at the Met Life Stadium in New Jersey is for Arctic conditions, with temperatures below 30F and the likelihood of heavy snow during the match between Denver Broncos and Seattle Seahawks.

I am expecting cultured, veteran quarterback Peyton Manning to steer the Broncos to a narrow victory, unless Seattle defensive back Richard “The Tank” Sherman freezes him out. It promises to be a brutal collision.

The spectators could be too cold even to boo, but the half-time show could warm them up. It features the Red Hot Chili Peppers.