NORMAN GILLER has checked his barometer, and reckons this week’s wintry weather barely rates a shiver when it comes to the Big Freeze that halted sport for three months more than 40 years ago 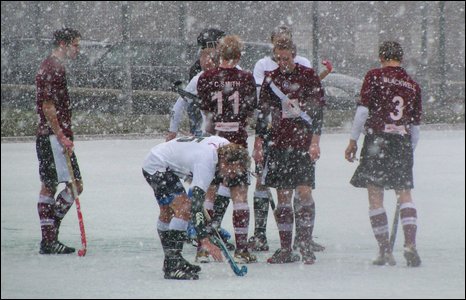 You should have been around in the Big Freeze of 1962-63. Now that was real snow, banked as high as a white elephant’s eye and causing total chaos to sports fixtures for more than two months, from Christmas through until March.

For sports writers, imaginations ran riot as we tried to think of ways of filling acres of space without any live sport to report. I was on the Daily Herald at the time, which was in its death throes before morphing into the broadsheet “old”, pre-Murdoch Sun. Among the ideas I remember us considering at morning conferences was the Champion of Champions Big Snow Race, with a Â£500 cash prize for the contestant first to get from the starting point of Wigan Pier to the finishing line at Wembley Stadium.

We decided on a line-up of 10 sporting favourites, each of them to be paid a whacking Â£100 fee: Henry Cooper, Lester Piggott, Fred Trueman, Jimmy Greaves, Richard Sharp, Graham Hill, Mike Hailwood, Peter Alliss, Billy Boston and â€“ for women’s interest â€“ Christine Truman. And, of course, there would be a Â£500 donation to “Cha-ri-dee”.

The idea melted away when somebody asked the fairly challenging question: “How do we get the competitors to Wigan?”

There were no trains and all the roads north of Watford were blocked. “It just might give Wigan’s Billy Boston an unfair advantage,” said the logical one.

My exalted role in those days was “Sports Editor”

of the Bristol/South Wales slip editions, and I got myself down to the west country to interview an 18-year-old boy who had weightlifted his way to fitness after years in a wheelchair. His name was Dave Prowse, who later became rather famous as the Green Cross Code Man and then Darth Vader.

But The Force was not with me on the way back to the Herald office when the train got stuck for five hours somewhere just outside Bristol, and I missed my edition.

There were some cracking stories during that period from the “you-couldn’t-make-it-up” school.

Groundsmen at Norwich City had the bright idea of clearing the snow from the Carrow Road pitch by using military flamethrowers. It worked so well that the pitch was flooded and unplayable. What Delia might have called overcooked.

Up at Bloomfield Road, they heated the Blackpool pitch to such good effect that overnight it became a sheet of ice. England teammates Jimmy Armfield and Tony Waiters were pictured ice skating on it.

Chelsea manager Tommy Docherty had a good plan. He hastily arranged a friendly in Malta to keep his promotion-chasing players match fit. They played and won. That was the good news. The bad news: UK airports were closed, and it was more than a week before they could get back.

There was virtually no racing at all from December 22 to March 8, but the papers still ran racecards just in case. Another idea at our Herald conferences was “Phantom Races”, with a panel of experts picking the winners. Another non-runner.

The Thames froze over to such an extent that they held a car rally on it, and people were going to work on skis. Honest.

The FA Cup third round took 66 days to complete after 261 postponements. One London-based freelance went to heroic lengths to get to a tie that was actually played, a replay between Portsmouth and Scunthorpe. He drove on treacherous roads to get to Fratton Park just minutes before the kick-off â€¦ 250 miles away at Scunthorpe.

Football reporters of a certain age will remember the daftest assignment we ever had. The call each of us got from our sports desks: “Get down to the Connaught Rooms. They’re about to announce the football results.” 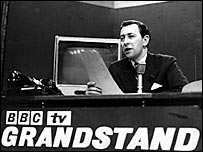 the launch of the Pools Panel, and its first day of full operation on Saturday, January 26, 1963 was the nearest I ever knew to reporting an episode of The Goon Show.

The BBC’s flagship Grandstand was in those days brilliantly anchored by David Coleman (pictured). We pen-pushing reporters â€“ particularly the deadline-chasing Sunday men â€“ were more than somewhat put out when it was decided the results would first be relayed to the nation before we were told them.

While Coleman, struggling with his earpiece, was straining to hear the phantom results being read monotone to the London studio, there was pandemonium off camera.

One of our Sunday brethren, who had helped himself too liberally in the hospitality room, was laying into the Pools representatives because the demands of television had been put before the needs of newspapers (a battle we lost long ago). Nabarro, he of the huge handlebar moustache and ego the size of Big Ben, walked into earshot and was greeted with the question: “How the fuck could you say Port Vale would beat Northampton? You wouldn’t know a football if it hit you in the fucking face.”

Nabarro, not a man renowned for his sobriety, took a step back to reply: “Sir, you are drunk. Even if you were sober you would get the same response, ‘No comment’. And you can quote me on that.”

Just a few weeks later it was decided that perhaps Nabarro was not quite the man for the Pools Panel chairmanship when, live on Any Questions?, he said something so profoundly racist, it makes Carol Thatcher’s private comments seem mild in the extreme.

His appalling diatribe included the “N” word, and West Ham manager Ron Greenwood â€“ a pioneer in bringing black footballers into our game â€“ was moved to say: “Mr Nabarro should keep his racist comments to himself. If one of our MPs is using this sort of language, what chance of encouraging young black British footballers to follow in the footsteps of the likes of PelÃ© and Garrincha?”

The Pools panel would have put it down as a home defeat for Nabarro.

Stat fact: The worst Saturday ever for football postponements was in 1940 when 55 of 56 scheduled wartime League games were called off because of heavy snow. The only game that survived was at Plymouth, where Bristol City were the visitors. City were soon wishing they had not battled through the snow-blocked roads. They lost 10-3.

Nobody then was allowed to report that it was one of the worst winters on record. It was a state secret. What a load of Colemanballs.