NORMAN GILLER wonders what happened to the editorial checking process on the Reading Chronicle, and looks forward to a weekend spent with Peter Alliss

My sympathy is with veteran journalist Maurice O’Brien, removed this week as Editor of the Reading Chronicle for what is perhaps best described as a reckless senior moment. He has been let down by his staff, who clearly did not have their eye on the ball. 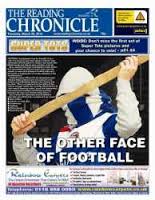 O’Brien wrote his own career suicide note when he launched a front page campaign against what he perceived as the revival of the old curse of hooliganism at Reading Football Club.

Under the banner headline “The Other Face of Football” – supported by a posed picture of a weapon-wielding masked Reading fan – the inflammatory piece included the sentence: “Football hooliganism may be thought of as a relic of a previous age when gangs of denim-clad skinheads held the game to ransom and names like Hillsborough and Heysel were symbols of its ills.”

It was the sentence of death for the career of 64-year-old O’Brien, a Chronicle staffer from way back in the hot metal days.

Mentioning Hillsborough and hooliganism in the same sentence – or anywhere under The Sun – shows shocking judgement and a level of ignorance that can be measured on the Richter scale.

Where was O’Brien’s safety net? Where were his colleagues – particularly on the sports desk – to point out the elementary error?

Any journalist, in sport or news, who has been even half alert will know that the Lord Justice Taylor Report in 1991 and the Hillsborough Independent Panel Report of 2012 both concluded hooliganism did not play any part in the tragedy which led to the deaths of 96 Liverpool fans.

Ask Kelvin MacKenzie, who has been reminded of it on a daily basis since The Sun took the false police line following the 1989 Hillsborough tragedy.

The buck stops with the Editor, but he is entitled to the support of his staff.

In my day (“Here he goes, the old bore’s on his soapbox again”) we were protected by professional readers. These were paid to read every word aloud to each other before any article was published.

The Liverpool Echo – understandably protective of their own – went gunning for the Chronicle, and their response would have played a major part in O’Brien’s departure.

They ran reams of critical comments from the moment the Chronicle hit the streets with their rash story.

I wonder how many other Editors are wondering, “there but for the grace of dog …”

I WAS ASKED recently by Christopher Davies of the Football Writers’ Association which sports event I would most like to cover outside football. That was easy: the US Masters at Augusta.

It has one of the most beautiful settings for any sport, and much of my love for the tournament was forged by the BBC’s magnificent coverage in the days before they became lost in the shadow of Sky Sports.

But I will still tune into the Beeb’s filleted reporting, if only to catch the commentating gems from Peter Alliss, who has taken over from the peerless Sir Peter O’Sullevan as the longest-serving sports commentator.

Now into his 80s, Alliss is obviously not as sharp and witty as he once was, but he is still well worth listening to because he has seen it all and understands every nuance of the game.

His folksy, chatty style of commentary irritates as many as it pleases, but for me the conversational approach beats those trying to add false drama rather than letting the picture tell the story.

It was 29 years ago that I scripted Peter’s This Is Your Life tribute from Eamonn Andrews. After the show, I asked him if there was anything he would have wanted added to the script: “One thing,” he said, “I would liked more credit to have been given to my predecessors at the BBC, Henry Longhurst. He was my mentor, my hero. He was a far better commentator than I will ever be, and his golf columns for the Sunday Times over a span of 45 years featured writing of the highest quality.”

Longhurst would have been proud of what his prodigy has achieved.