NORMAN GILLER helps to celebrate the 80th birthday of the Godfather of football writers, Brian Glanville,  and discovers (again) that online enthusiasm does not convert into book sales

My 90th book runs off the presses next week, which surely warrants environmentalists reporting me for waste of wood. Never in the field of human publishing has one man done so much to enlighten so few.

The latest book is called Tottenham, The Managing Game, and as self-publisher, I am billing it as “the book you can play as well as read”.

The book was born on the internet and given the kick of life by an angry argument as to who have been the greatest managers of Spurs. The book grew from a defence I was making on Facebook and Twitter of my old mate Harry Redknapp, who was taking terrible (and unwarranted) stick following the turmoil of the last weeks of Tottenham’s 2010-11 season.

From managers, the debate took a new twist with the subject switching to Tottenham’s greatest players. That was when I decided to offer a book for the arguments so that opinions could find a permanent page in print rather than disappear into the oblivion of cyberspace. 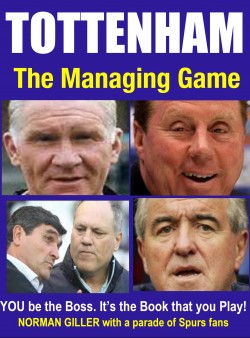 It is a book of two halves, the first my history of Spurs managers, with biogs on every one of the 26 bosses who have filled the White Hart Lane hot seat. The second half is given over to dream teams selected by Spurs fans on Facebook and Twitter.

Readers playing The Managing Game can read the opinions of scores of supporters and then fill in the names of their team in the selection panel at the back. The one rule is that they can only pick players from when they started supporting the club, otherwise everybody would almost certainly select Pat Jennings, Alf Ramsey, Danny Blanchflower, Dave Mackay and Jimmy Greaves.

I started promoting the book online last week, and the early indications are that my losses will run to several hundred pounds.

All those of you out there who think that Facebook and Twitter connections are a certain path to prosperity need to think again. I have more than 2,000 Facebook friends and approaching 1,600 Twitter followers, but the vast majority have ignored my early approaches. Perhaps I am being too Delboyish with my salesmanship? This time next year Rodney, I’ll be bankrupt.

So far, orders for the book from the Twitterati can be counted on the fingers of a one-armed bandit. This despite daily posted pleas along the lines of, in less than 140 characters: Tottenham The Managing Game book that many of you helped write can now be ordered at www.normangillerbooks.com.

The response from my Facebook friends is much more encouraging, but not in sufficient numbers to make me confident my latest project will get into profit.

The perils of self-publishing have been well chronicled by me in previous columns, and if you are considering following me down the publish-and-be-doomed road, make sure you do your homework first.

For example, I did the unprofessional thing of taking it for granted that two of my banker outlets – the Tottenham Hotspur club store and the Maher shop in Welwyn Garden City – would take several hundred books between them. Wrong!

Tottenham have just informed me that in future they will stock books only from their new “partner” publishers, SportsVision.

Then, just after I had placed my print order, I heard that the Maher shop – run by the fiercely independent and creative Tony Maher – has gone into liquidation. Tony, who once had six independent shops taking on the might of Amazon and the supermarkets, is now regrouping here on line at Stimulating Ideas.

In the meantime, to keep my head above the stormy publishing waters, I have been given the privilege of writing the official biography of the late, much-mourned Sir Henry Cooper, whom I knew and loved – yes, loved – for more than 50 years. His sons Henry Marco and John Pietro are trusting me to capture their Dad for posterity rather than prosperity in a book titled Sir Henry Cooper, A Hero for All Time.

I am going down the conventional publishing road with this one, in the safe and caring hands of the vastly experienced Jeremy Robson, now running The Robson Press as a subsidiary of Iain Dale’s flourishing Biteback Publishing Company.

But while writing my affectionate memoir on the man who was Britain’s most popular sportsman, I will be keeping one eye on the sales of Tottenham, The Managing Game. Will it turn me off self-publishing as I chase my silly target of having 100 books published before I kick the proverbial? I wonder what the environmentalists will think of that?

BOWING THE KNEE, I pay homage to that doyen of football writers Brian Glanville, who has just celebrated his 80th birthday.

Chelsea presented him with a cake at Stamford Bridge on Saturday, where in time-honoured fashion, Brian was working for the Sunday Times, whose pages he has adorned with millions of wise words over the years.

Then, last night at the Emirates, the Mirror’s John Cross made a suitably erudite speech while presenting him with an Arsenal shirt carrying the No 80, which presumably means Glanville could be on Arsene Wenger’s bench for Sunday’s North London derby with Spurs. That would not phase Brian one bit, because he is always proud of the sweeping role he used to play as a regular Sunday afternoon defender with Corinthian ideals.

Glanville, the twin-tongued, Italian-speaking Godfather of football scribes, first saw the Gunners play back in 1942 – at White Hart Lane, as they were then sharing the ground with Spurs while Highbury was being used for wartime defence purposes.

I am one of the few who have written more books than Brian, but his quality defeats my quantity by lets say the 7-1 scoreline when Arsenal hammered Aston Villa in 1935, with all seven goals coming from the great Ted Drake.

Brian has been a wonderful ambassador for our profession, never short of confidence or anchored by false modesty and worthy of reading by any young journalist who wants to know how to write about football with authority and style.

It was a privilege sharing press boxes with you. Hope you go on to the century of years as I am trying to reach a ton of books.