Tottenham-supporting NORMAN GILLER says that by rights and commonsense, there can be only one football club to move into London’s Olympic Stadium, and it isn’t Spurs. Plus, he offers fond recollections of the late Nat Lofthouse

The Olympic Park Legacy Company could provoke an uncivil war if they vote next Friday to hand London’s 2012 Olympic Stadium to Tottenham Hotspur after the Games are run, won and done.

For those of you not familiar with the geography of London, the stadium is in Stratford, on the northwest side of the borough of West Ham (now known as Newham).

The Olympic Stadium is 3.2 miles from West Ham’s ground at Upton Park, and just 2.6 miles from Leyton Orient at Brisbane Road. Also in the area are once-famous amateur clubs Walthamstow Avenue, Clapton, Leyton and Leytonstone. Dagenham and Redbridge are just a hop down the A13. Much has been said about how deprived the area is, but one thing it does not need is another football club.

Tottenham are 7.3 miles away in North London (I am being kind there, because if you take the usual North Circular Road route, it is 11.4 miles).  But Spurs are pushing ahead with their pirating plan to muscle their way into the Olympic Stadium, apparently abandoning their long-intended strategy to build a new ground at White Hart Lane. 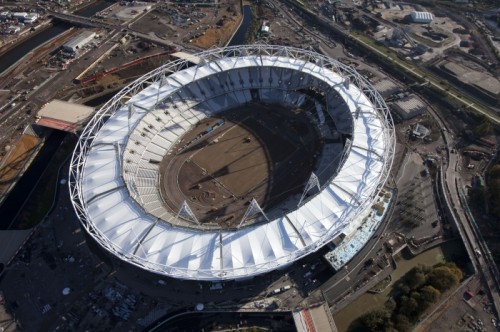 I bet I know the Stratford area better than anybody on the Tottenham negotiating team, including their hired gun Mike Lee. He is not so much a spin doctor as a spin surgeon, whose CV includes helping London get the 2012 Games and – mind blowingly – the 2022 World Cup finals for that football hotbed of Qatar.

I was Sports Editor of the local Stratford Express newspaper, and my two children were born in the same Stratford hospital as Lennox Lewis. I know the way the hearts beat at the Hammers and the Os, but as a dedicated follower of Tottenham, I can see the arguments from all sides.

It is surely no coincidence that since Mike Lee took over the masterminding of the PR for Spurs, the internet has become awash with views, many of them anonymous, as to why Tottenham and the Olympic Stadium at Stratford are made for each other. This tends to overlook the minor detail that the first thing Spurs will do is demolish the athletics-intended stadium – built with tax payers’ money and lottery funding – and replace it with a new football-only ground.

These are some of the smokescreens I have spotted online:

The promise made to the IOC by Lord Coe and his Games-winning team was that the Olympic Stadium at Stratford would be maintained as an athletics arena after the 2012 Olympics. They would not have won the bid had they said, “We will knock down the stadium, build a football ground for one club and switch athletics to Crystal Palace, a 50-year-old arena that is long past its best.” And that’s before Crystal Palace Football Club announced plans of their own to move back to their original home at the site of the athletics venue.

“Compared to the match-day jams at White Hart Lane, the Olympic Stadium will provide Tottenham fans with easy journeys to and from the ground, with excellent parking facilities.”

I confidently forecast that one of the major non-sports stories during the 2012 Games will be London traffic gridlock. Spurs fans dreaming of a traffic-free drive to see their team play should take a test run to the O2 Arena when a major event is being staged. That’s neighbouring territory to West Ham and the roads and car park entrances become clogged to a standstill. Tottenham match day at the Olympic Stadium will provide as much travel frustration as at White Hart Lane.

“Arsenal and Manchester City overcame the protests of their fans and moved to new homes into which they are comfortably settled and accepted.”

This may be true, but neither Arsenal nor City encroached on the territory of other clubs. The last time the Gunners did that was in 1913, when they moved from Woolwich to Highbury and have never been forgiven by Tottenham.

“The debate among Spurs fans doesn’t seem to have accounted for the fact that unless a rich sheik or oligarch rides to the rescue, it’s likely to be Stratford or no new stadium at all.”

My bet is that if the Stratford bid is kicked in to touch, Tottenham will quickly revisit their original Northumberland Development Project. This revolves around the rebuilding of White Hart Lane, and the local council will be ready to jump through hoops to help the club cut the costs from the projected £450 million.

Mike Lee is going to have to spin with Graeme Swann potency against Tottenham’s own official website, which states: “The Club is proud of its roots in Haringey, having been based in Tottenham for over 126 years. We are the Borough’s top visitor attraction, with around 1m visitors a year and one of the largest employers, pumping many millions of pounds into the local economy and via business rates.”

Morally, they should not walk out on one of the most rundown areas in the land. Chairman Daniel Levy and his cohorts are talking pounds, shillings and sense. But surely soul and spirit should come into the equation? Or have I become an idealistic and blinkered old hack?

The best overview I’ve read of the for-and-against arguments came from the diligent Nick Harris in the Mail on Sunday.

He was supported by a typical no-holds-barred contribution from his wise team-mate Des Kelly, who growled: “So the plan is to tear down a brand new Olympic Stadium worth half a billion pounds after just three weeks of serious use and then build another ground on the same spot. That has nothing to do with the word ‘legacy’. That’s vandalism.

“Tottenham Hotspur’s proposals for the main arena of the 2012 Games tell you everything you need to know about the swaggering arrogance and shameless opportunistic greed of modern football.”

By rights and by commonsense, the Olympic Stadium in Stratford should become the new home of West Ham United. It would be a good idea for them to suggest a merger with Leyton Orient, which would give them the entire width of East London as their catchment area. West Ham Orient has a nice ring to it, don’t you think? But Stratford Hotspur would be poison on the tongue of most straight-thinking Tottenham fans.

If Tottenham are allowed to move into Stratford, the fall out with Hammers and the Os will make Spurs’ 98-year turf war with “Woolwich” Arsenal seem as tame as a game of croquet on the vicarage lawn.

THE DEATH OF Nat Lofthouse at the age of 85 reminded me of when I first had the privilege of interviewing him for the Daily Express back in the 1960s, four years after he had hung up his boots.

When I was falling in love with the Beautiful Game in the 1940s and through the 1950s, he had been one of my heroes. But I was horrified when watching him barge goalkeeper Harry Gregg and ball into the net for one of his two goals that gave Bolton their 1958 FA Cup final victory over Manchester United.

I plucked up the courage to tell him that I thought it was a foul and should have been disallowed. “You’re reet there, lad,” he said in his lovely made-in-Lancashire lilt. “I ran back to the centre-line like an express train before the ref could change his mind.”

That was typical Nat. On and off the pitch he was straight down the middle.

I was astonished to find that at 5ft 10in I was an inch taller than a man who had always stood like a giant in my mind, but he was brickwall solid and had a heart as big as his head.

“Football was better than working down t’mines,” he said. “My Dad used to fill sacks of coal for thirty bob a week, so I never complained about what I was earning and I travelled the world for free. They were t’best years of my life.” And thirty bob, for those who were born after decimal money, was just £1.50.

Nat Lofthouse. They don’t make them like that any more.