Sports writers working at Wimbledon in 2013, such as Neil Harman of The Times, are a fortunate lot, writes the SJA website’s self-acclaimed old git, NORMAN GILLER

Memo to man of the moment Andy Murray: please ink into your diary – awards lunch with members and guests of the Sports Journalists’ Association in London on Thursday December 12. That’s the day that I predict with confidence that “Sir Andy” will become the first British-born tennis player to win the SJA Sportsman of the Year Award.

If I am proved wrong, then Chris Froome will have to have won the Tour de France carrying his bike on the mountain climbs, Alistair Cook to have out-Bradmanned Bradman with the bat, or Mo Farah to have broken the 12-minute barrier in retaining his world title for the 5,000 metres.

Murray’s Wimbledon win rates with the greatest one-man performance by a British sportsman in my 70-plus years on this mortal coil. The feel-good factor he created is close to what England’s World Cup-winners achieved in 1966.

I would like to share with you a Tweet I sent to my friend at The Times, Neil Harman (@NeilHarmanTimes) within moments of the Djokovic concession: “Good of Andy Murray to mark your 40 years in journalism so memorably. Delighted it happened on your watch.”

I followed up with: “Thinking of the likes of Peter Wilson, Lance Tingay, Frank Rostron and Laurie Pignon, who never got to experience a Murray moment.”

Back in the day, every national newspaper carried a specialist tennis reporter, but Neil is one of a dying breed. Few in these days of shrinking staffs get to globe trot following the tennis circus.

Neil does it brilliantly, with good humour as well as beautifully crafted descriptive reports. His foundation as a once highly respected football writer with the Mail shines through, fortifying his eyewitness accounts with facts to go with the hyperbole.

He has found time while travelling the world in Murray’s wake to tie up with leading  sports publisher Jeremy Robson, writing one of the books of the year, Court Confidential.

As you will see here, Neil has been mixing with top company in plugging it…

THOSE WHO ARE ON THE BALL, I am sure, will want to point out that I am wrong to have put Peter Wilson in the list of those tennis writers who did not enjoy a Murray moment.

“The Man They Could Not Gag” reported the Fred Perry hat-trick of Wimbledon wins from 1934, and spent the rest of his remarkable sportswriting career pining for a British player to emulate the peerless Perry.

Peter Wilson was the master who inspired me to want to become a sportswriter. After all, we had so much in common. He was the son of a Times journalist who was educated at Harrow. My father was a bookie’s runner and I left my East End school three days before my 15th birthday. Oh yes, we were cut from the same cloth.

I used to sit at Wilson’s feet as I built my sportswriter foundation on the fight game’s trade paper, Boxing News. What a role model! 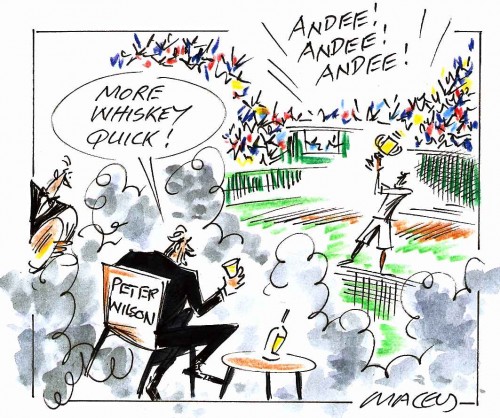 Over a span of 40 years, including wartime service, the matchless Wilson covered 32 world heavyweight title fights, each Wimbledon final from 1929, eight summer Olympics and four winter ones, and nearly every major post-war cup final, rugby international, Test match, Grand National and Derby up until the mid-1970s.

Chain-smoker Peter, of the luxuriant moustache, flowing cape and silver-topped cane, was a larger than life character who in the best traditions of old Fleet Street could sink a bottle of whisky without spilling a syllable.

I once asked him how he rated Perry. He told me in his Old Harrovian tones: “Too arrogant as a man, but close to perfection as a player. Only one better back in those 1930s – Donald Budge, the greatest of them all.”

I wonder how he would have judged Andy Murray? Old balls, please.

And in case you were wondering, women Wimbledon champions Ann Jones, Angela Mortimer and Virginia Wade were all acclaimed as what was then the Sports Writers’ Association’s Sportswomen of the Year, and another tennis player, Greg Rusedski did lift the SJA Sportsman of the Year trophy in 1997 – the year he managed to reach the final of the US Open. But though he played Davis Cup for Great Britain, Rusedski was born in Canada.

I ONCE DESCRIBED John Inverdale as having the biggest mouth on television during my days as a TV sports critic.

For my money, Invers is one of the better sports presenters around in an era when the likes of Clare Balding and Sue Barker are the best on show.

What I didn’t expect was for the usually assured and non-controversial Inverdale to put his foot into that wide mouth and follow with the rest of his leg. His comment that Wimbledon women’s champion Marion Bartoli was “not a looker” was unusually insensitive, ill-judged, and sexist.

But it is ridiculous for people to call for his head over his moment of appalling bad taste.

He has sent Marion a written apology and has hung his head on screen.

Invers remains a master broadcaster, but he needs to keep that big mouth controlled.

That should be the end of it. Game, set and match to Mademoiselle Bartoli.