What do Johnny “The Stick” Goldstein, One-Armed Lou, Fat Stan Flashman and NORMAN GILLER have in common? All were able to get hold of the hottest tickets in town 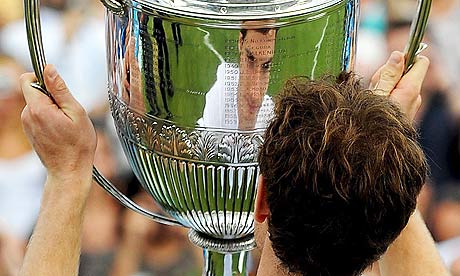 Any sports reporters among you will, I know, hate those people who try to treat you as if you are some sort of ticket agent. When I was reporting for my daily bread in Fleet Street I was plagued by people asking me for tickets for cup finals and major matches.

I treated them with the contempt they deserved, and used to mutter that I would never lower myself to their level. Until, that is, this week.

I have become something of a walking, talking Mills & Boon book recently. After losing my lovely wife, Eileen, after an idyllic 45-year marriage, I found myself a new partner, Jackie Jones, on my first night out as a widower.

What a lucky bloke I am. Many people go through life without finding one good partner. I have now got my second one when I wasnâ€™t even looking.

Which all brings me to my reason for changing a habit of a lifetime and begging for tickets. Jackie is a tennis fanatic, and I opened my big mouth and said I could get her into the Mecca of sports tournaments. Murray Mania has, of course, turned Wimbledon tickets into gold dust.

Who could I turn to? Who could get me off the hook?

I went through my contacts book and did the Giller imitation of Uriah Heep as I put the arm on some old mates to save my face.

In their shoes, I would have told me to push off, or words to that effect. But one of them whispered around among his contacts and came up with two tickets for menâ€™s quarter-final day.

Now that is what you call a man of influence and generosity, and Iâ€™d like to thank him – he knows who he is – for putting action where my mouth is.

It all got me thinking of the days when I used to get my tickets for major events from three London touts, who are among the greatest characters to have crossed my path.

All have now gone to the great ticket office in the sky, and each one could have stepped out of a Damon Runyan short story: Johnny “The Stick” Goldstein, One-Armed Lou and Fat Stan Flashman.

Johnny “The Stick”, who was buried in a Tottenham shirt given to him by his idol Jimmy Greaves, traded in football tickets that â€” at this distance â€” I can reveal came from First Division players, who were not paid fortunes like todayâ€™s prima donnas.

Once invited to attend an FA investigation into black market Cup final tickets, Johnny said: â€œWillingly, provided I am able to name the FA and League officials who have bought tickets from me for Sinatra concerts.â€ The invitation was dropped.

One-Armed Lou operated in the boxing world, touting tickets but making his big killings as a ringside gambler. He used to always perch in a neutral corner opposite where the referee stood between rounds. Lou perfected being able to work out how the refs were marking their cards by the movement of their pencils, and would adjust his odds as he calculated the points for each boxer.

My Dad was a bookies’ runner in the East End and kept interesting company. He told me of a prominent referee

of the 1950s who worked in harness with a gambling ring. So that they knew how to set their odds during a fight, he would indicate which boxer was ahead by putting his card in his left pocket for the blue corner and his right pocket for the red corner.

Fat Stan Flashman, who was nearly as wide as he was tall, was a good contact of mine in my Daily Express reporting days, and used to feed me stories in return for payment in Nelsons (Nelson Eddys: readies).

Stan was the king of the ticket touts â€” or, as he called himself, â€œentertainment broker.â€ He could get his hands on anything from a Buckingham Palace garden party ticket to a seat at the Last Night of the Proms. But his richest harvest came from football cup finals.

I could write a list of 50 top players and managers who used to provide Stan with tickets under the counter in return for notes in the hand. I was with him in his Kingâ€™s Cross flat that doubled as an office after The People claimed that police were investigating his business. This was just before the 1971 Arsenal-Liverpool final in which the Gunners were going for the double.

It was the hottest ticket in town, and Stan was in his element. He trusted me to the point where he was just showing me a wad of tickets he had been handed by his Highbury contacts when there was the sound of a police siren outside his flat.

We looked out of the window to see two police cars pulling up and four officers getting out, clearly intent on an arrest. â€œThey canâ€™t touch me without evidence,â€ said Stan as he started to flush the tickets down his toilet.

There was a commotion outside Stanâ€™s front door, and then the police went off holding on to a neighbour they had come to nab on a hit-and-run charge. I left a cursing and cussing Stan with his arm down the loo seeing what he could retrieve.

He later went “legit” as the wildly unconventional chairman and owner of Barnet Football Club, and he remains in my memory as one of the unforgettable eccentrics of the English football scene.

The source of my Wimbledon tickets is no spiv, of course, and as Jackie and I gear up for our big day out at Wimbledon, we thank him for his help.

Now who and where next? The Ashes Test at Lordâ€™s looks tasty. This is when I miss, more than somewhat, my old contacts Johnny the Stick, One-Armed Lou and Fat Stan. They were loveable rascals who deserve a book about them. I will call it Psst!