NORMAN GILLER is first in the queue of SJA members who want to be nominated to carry the Olympic torch in the relay around the country next year. But first he looks back more than 60 years to another unlikely torch-bearer

Hands up if you know how John Mark became famous in the world of sport. Clue: He had to put his right hand up for his 15 minutes of fame. Or perhaps I should say “flame”.

That gives it away, I guess. Mark was the man who lit the Olympic flame the last time the Games were staged in London in 1948. And to this day it remains a point of contention why a virtually unknown athlete was chosen ahead of more obvious candidates like mile master Sydney Wooderson, hurdler Donald Finlay or Olympic champion walker Harold Whitlock.

I am reminded of the controversy in this week that the London 2012 organisers unveiled the prototype of the torch that will be carried by a relay of 8,000 torchbearers on its journey across the UK next summer.

One of my creations for the Daily Express back in the 1970s was a regular column called Saturday Sports Forum, in which I answered readers’ questions and it included a regular “Whatever Happened To …?” feature.

A reader wrote in (postcards only, please) asking what happened to the 1948 Olympic flame lighter. I put on my Miss Marple hat and tracked Mark down to a rural medical practice in remote Liss in Hampshire, where he was the GP.

He was mortified that I had broken into his peaceful world, where he was very content being out of the spotlight. “I’m terribly sorry but I do not give interviews to the press,” he told me in a cutglass Oxbridge accent. “All I want to say is that it was the proudest moment of my life to be chosen to light the Olympic flame, and I will never ever forget the day I carried the torch around the Wembley track.”

I managed to weedle out of him that the run took longer than rehearsals because competitors who had just paraded behind their national flags broke ranks and mobbed him as he entered the stadium.

Mark was one of Britain’s leading quarter milers of the 1940s and an exceptional rugby player, and though he was a charmer of a man, he remained determined not to say another word.

I then rang Harold Abrahams, the Olympic hero featured in Chariots of Fire, who was a key man in the planning of the London Games of  1948, and asked him why an unknown athlete had been selected for the flame-lighting ceremony.

He told me matter of fact: “Because he looked like a Greek god. He fitted perfectly the image of an Adonis running a torch up Mount Olympus. We did consider Donald Finlay, but decided instead to have him taking the Olympic Oath. And dear Sydney Wooderson did not even enter our minds. He was such a frail man and, believe me, carryng the Olympic torch on that last lap with the arm extended took enormous strength. John Mark carried it out to perfection.”

Ian Wooldridge, my treasured friend on the Daily Mail and one of those generous journalists who rang rivals when he liked what they had written, telephoned to say: “Loved your piece on John Mark. I could have told you that you wouldn’t get any decent quotes from him. He is the epitome of the modest English sportsman who belonged to the Corinthian age.

“I was recently at a dinner party with Roger Bannister and a few other Oxbridge athletes and the story was told over the port that when John Mark was making his entrance with the torch, the Queen – now the Queen Mum – was overheard saying in the Royal box, ‘Dear me, what a pity they did not get that dear little Sydney Wooderson to do it’.”

Fast forward to 1988 and to a documentary series I devised for ITV called the Games of ’48, introduced by my close pal Brian Moore and produced by an exceptional TV-journalist called John D Taylor. We flew in Olympic legends Bob Mathias, Emil Zatopek and Fanny Blankers-Koen, but again John Mark declined to be interviewed. 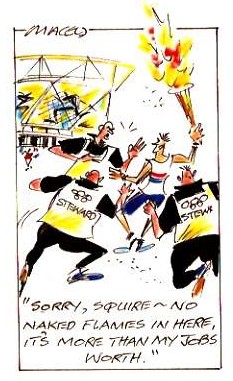 Fanny was great fun, a real laugh a minute and she said: “When the athlete carrying the torch entered the stadium every woman swooned! He was a magnificent specimen of manhood. I tried to arrange a rendezvous with him after I had won my four gold medals, but I was told he was too shy to meet me. What a pity!”

Mark died following a stroke in 1991, aged just 66, so the story of how he kept the secret for six months of being the man who would light the flame passed on with him.

I hope the 2012 Olympic committee choosing the person to light the flame show more imagination than the 1948 selectors. As good as John Mark looked, I think the honour should have gone to one of our Olympic heroes from the 1936 Games.

Who will ever forget the image of Muhammad Ali lighting the flame in Atlanta in 1996, a secret that was kept until the spotlight picked him out? Or Cathy Freeman in Sydney in 2000? Or Li Ning running in the air around the Bird’s Nest in Beijing in 2008? They are all iconic moments in Olympic history, which puts added pressure on the London organisers to get it right.

The internet is alive with supposition as to who will be the last to carry the torch in 2012. The most frequently mentioned names are Sir Steven Redgrave, Sir Matthew Pinsent, Sir Chris Hoy and Daley Thompson.

I would like to see the Committee go against tradition and give the honour to a lady. Dame Kelly Holmes or Denise Lewis would fit the bill perfectly.

The nation carries a torch for both.