How appropriate that in the week Barack Obama became US President, I am contacted from the United States by a former Fleet Street giant who himself once carried a presidential title. The blast from the past brought back into my life the exceptional Clive Toye, the man I succeeded as chief football reporter on the Daily Express in the autumn of 1966, big boots that I never quite filled.

Clive had one of the more memorable Fleet Street farewell parties. Midway through the toasts wishing him luck spreading the soccer gospel to the United States, he heard the club he was joining had gone out of business â€“ before a ball had been kicked in the fledgling North American Soccer League.

His reaction, typical of the swagger of Expressmen in those days, was to order another bottle of bubbly. Within 24 hours he had been offered four other jobs, three in the PR field and one as a general manager. “I knew little about PR and even less about being a general manager,” Clive reasoned. “So I went for the bigger challenge.” 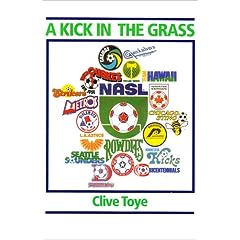 took the job as Baltimore Bays’ general manager, beginning an eventful career in which he became a legend in US Soccer. His greatest coup â€“ when President of New York Cosmos â€“ was persuading PelÃ© to come out of retirement to give the NASL a “Kick in the Grass”â€¦ and thatâ€™s the title of the book Clive has written about his power struggles at Cosmos. It makes managing in the Premier League seem like a walk in the park.

Born in the Pilgrim Fathers departure point of Plymouth, Clive was a natural candidate to be a Football Father in the States, and he can take much of the credit for laying the foundation for the present success of youth and womenâ€™s soccer,

the United States national team and the Beckham-inspired Major League.

Clive, who is 74, rose to NASL President and he has been a distinguished World Cup match commissioner and a leading voice in CONCACAF, the continent-wide governing body for football in the Americas. Not bad for an ex-Fleet Street hack.

On the Express, we always thought Clive would eventually become a Bill Bryson-style travel writer. He specialised in getting to the unexpected places, including bluffing his way into the then “walled-off” Albania to see the unknown North Koreans preparing in secret for the 1966 World Cup finals.

Now an American citizen living a 45-minute rail journey north from New York City along the Hudson River, Clive saw my SJA blog requesting anecdotes about the old, pre-computer days of sports reporting in Fleet Street and came up with the following gem:

“It was the early 60s and I went into the Express office to see if there was anything worth my attention (and a back page lead), before leisurely lunching at the Albion or the Cheshire Cheese. Suddenly I was intercepted by someone bearing a toothbrush and a ticket for Barcelona and rushed out the door into a taxi for LHR.

“‘The Brummie Bashers are at it again on their friendly tour,’ I was told, ‘and their next game is in Seville tomorrow night; off you go.’ I don’t know if that name has passed down through the ages, but in the early 60s Birmingham City’s style of play earned them that title (and today would have half the Premiership players offering to reduce their obscene wages to get across the Channel to safety. Where the Bashers played, there was no need to perfect the art of diving).

“‘Right,’ I said, ‘Seville it is, but this ticket is for Barcelona.’ Neither for the first nor the last time was it obvious that for those whose view ranged from Ludgate Circus to the Law Courts that once you were in foreign territory somewhere, you must be close to anywhere else (‘You’re in Lima, Peru? Oh well, just pop up to Mexico City for the game tomorrow will you?’ ‘Before you go down to Santiago nip over to Montevideo,’ was another).

“So I landed in Barca and bumped into Ian Wooldridge, sent by the Mail on the same adventure with the same belief he would get to Seville somehow and, somehow, we did; charming, cajoling, demanding our way on to the only domestic flight in a manner which would have us under armed guard in these days of airport security.

“Too late that night to do anything, but the next morning we were off to the Sevilla club to ask for press passes and a telephone in the press box. We got the passes but every blandishment and plea for phones got us nowhere: ‘Impossible senor, absolutely impossible.’

“This was a desperate situation, because in those pre-STD days unless you had a phone with a known number to allow fixed time calls to be booked to it, you could wait hours for a phone call to go through to London.

“Woolers had the solution â€“ ask the British Vice Consul in Seville to help, and help he did; within a couple of hours we had acknowledgement that telephones would be provided and that here were our respective numbers. Well done Woolers and the Vice Consul!

“So we repaired to our hotel and had lunch while the hours passed for our calls to London to go through; gave our offices our stadium numbers, and fixed time calls were placed for every 15 minutes, starting 15 minutes before kick-off time.

“At the stadium, we found the press box, found our seats and, hallelujah, found the telephones with the right numbers on the ledge in front of our seats.

“The first call did not come through, neither for Woolers nor for me, nor the second. I fathomed some silly sod had not plugged in the line properly, so I took hold of the wire and started tracing it, some distance, to its source where I found that, indeed, it was not plugged in. Mostly because there was nothing to plug it into!

“Panic, of course, but Roy Rutter of Reuters was also there and, with his impeccable Spanish, found there was one phone downstairs somewhere where we could take turns to send our copy through his office in Madrid. There were problems, of course. We had to take turns on the phone, and take turns standing in the tunnel on the edge of the pitch, reporting events to whoever was on the phone.

“The phone, yes â€“ and this is true â€“ was in the corner of the visitors’ dressing-room, and when the game was over it happened to be my turn to be castigating the Brummie Bashers as the players trooped in and started changing. I can still see Harry Hooper’s baleful glare in my direction as I tried, to no avail, to lower my voice and still be heard in Madrid.