NORMAN GILLER says the one good thing about the Di Canio appointment is: at least he’s stuck his arm up about being a fascist

Is this old dinosaur alone in being relieved and delighted that Paolo Di Canio once identified himself as a fascist? It’s good to know where the enemy is. The ones we should worry about are those who keep their support of fascism secret. 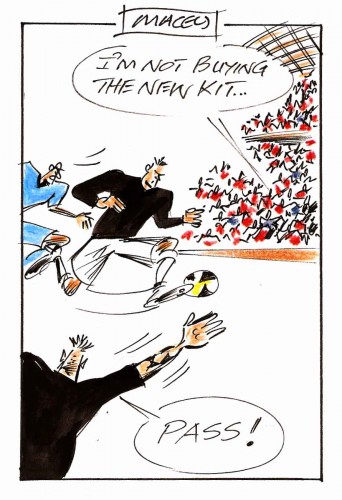 From what I can deduce – using the evidence of my eyes and ears – there are hundreds who gather at our football grounds week in, week out. There must be zero tolerance to their racist chants.

Nobody can salute Sunderland for their stupidity. As the Kid from Cable Street, I am moved to say I hope there is never reason to rename the “Black Cats” the “Black Shirts”.

The saddest thing is that Di Canio’s selection as replacement for the dignified Martin O’Neill has given fascism the oxygen of publicity. How the Sunderland board failed to think through the ramifications of their appointment exposes a dim lack of vision at the Stadium of Light.

For the excitable Italian to claim he is a fascist but not a racist is the equivalent of supporting the new Pope but saying you do not believe in God. Fascism and bigotry go together like evil twins.

Mussolini tattooed on Di Canio’s bicep is even more incriminating than being caught giving the stiff-arm salute that sends shivers up the spine of anybody from my generation with memories of the dark days of Hitler. Those morons making racist chants at football matches and chilling comments on the social networks obviously do not have a clue about the vile doctrine they are supporting.

Back in my reporting days I recall interviewing Brian Clough after he had been elected chairman of the Anti-Nazi League. He told me: “Anybody who doesn’t know what the Nazis did to our world with their poisonous philosophy should be forced to visit Auschwitz or Belsen. I detest war but would willingly take up weapons against anybody who preaches fascism in any shape or form.”

The mind will not take in just what Cloughie would have made of Di Canio being put in charge of the club where he scored 54 goals in 61 League games before a knee injury cruelly ended his playing career at 28. It was at Sunderland that Brian came under the strong influence of manager Alan Brown, who was a member of the Moral Re-Armament movement that believed in the Four Absolutes – absolute honesty, absolute purity, absolute unselfishness and absolute faithful love. There is no question that Cloughie would have raised the Stadium of Light roof with his protests against the appointment of Di Canio, particularly at the expense of his protégé O’Neill.

I have always been of the view that politics and sport should, wherever possible, be kept apart, but it is Sunderland who have taken the game into the political arena by their short-sighted selection of Di Canio, an admitted fascist regardless of his avoidance of the questions at this week’s press conferences.

If I were a sports editor, I would be sending a reporter to Swansea to seek out the opinions of Michael Laudrup. In 2005 he was a founder member of CEPOS – “a classical liberal/free-market” conservative think-tank set up in Denmark. Its aims are the preserving and strengthening of the foundations of a free and prosperous society while supporting tax-cuts, less government interference and the encouragement of private enterprise.

I wonder what Michael, a great tactician and free thinker, makes of the Di Canio appointment?

MY BEST WISHES to our retiring (but not shy) SJA chairman Barry Newcombe as he rides into the sunset, still with many words of wisdom and service to come from his lap top.

I can remember Barry newly down from Northampton back in the 1960s with a portable typewriter, and starting to make a name for himself as a bright young reporter under the wing of R-r-r-reg Hayter, the F-f-f-fagin of Fleet Sreet.

His specialist subject has always been tennis, but it should not be forgotten that – typical of a Hayters graduate – he is an exceptional all-rounder, with rugby union, the Olympics and even occasional forays into football as added strings to his bow.

I cannot think of a more deserving recipient of the Doug Gardner Award after his record seven years unstinting service in the SJA chairman’s office. As somebody who knew Doug well in his role of omniscient driving force behind that magnificent magazine World Sport, I can say with some authority that Barry has always measured up to the Gardner standards of integrity and intelligence.

The fact that Barry has kindly furnished me with tickets for key days at Wimbledon has had no bearing on my assessment of him. Honest.

He just happens to have always been a credit to our profession. New balls, please.