NORMAN GILLER admits defeat, to Slovenian dongles, to a Brazilian waiter and to an admiration for the finest British tennis player of his life time. Cartoon by KEVIN MACEY

We were about one-third of the way down the Rhine when I realised just how addicted I have become to my twin online mistresses, Facebook and Twitter. Let’s call them my wifi wives.

There is no more pleasing and pleasant holiday than cruising down the Rhine, but before you climb aboard your chosen river ship make sure they have an internet connection. 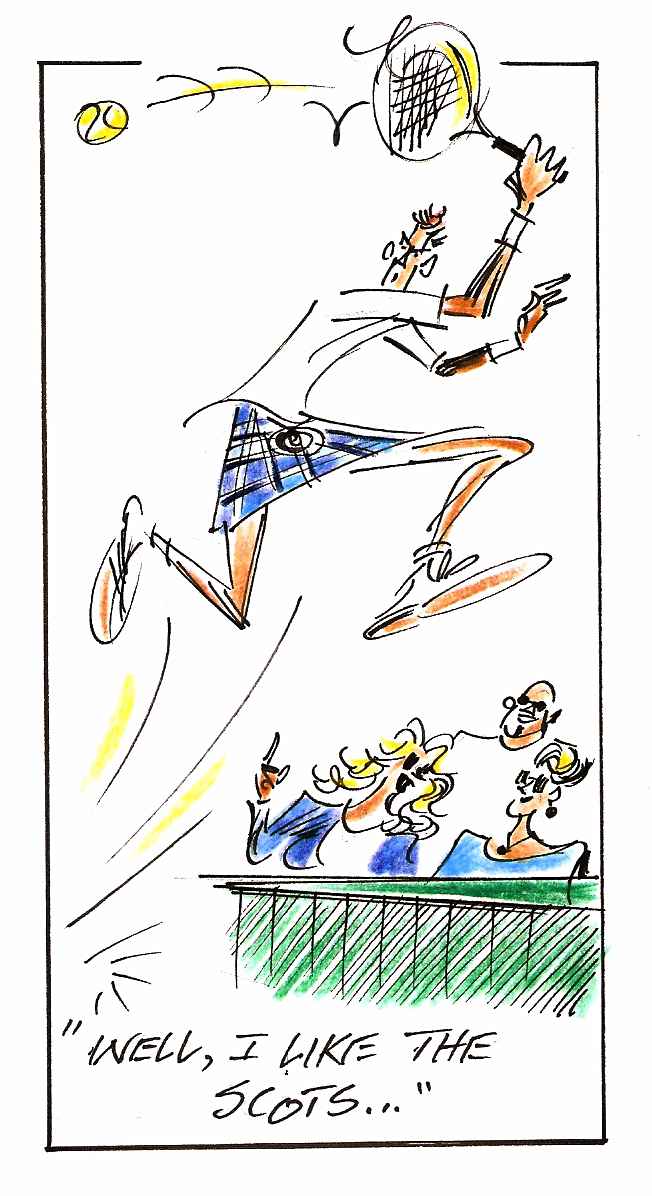 I have just gone nearly two weeks cut off from the World Wide Web, and the frothing at my mouth made our ship’s captain wonder if he had been caught up in chemical warfare. For a news and gossip addict like me, it was as if I had suddenly been deprived of my food and drink (actually, I’ve eaten like a schwein, but that’s another story).

By the fourth day I was ready to kill for a connection, and I was prepared to propose marriage to a Slovenian chambermaid called Martina when she told me she had a dongle on her laptop that gave internet access. As dear old Eric Morecambe would have said, “A dongle on your laptop? Now there’s a novelty. ”

Martina informed me that signals along the Rhine were weak but that if I were patient I’d eventually get through. Cruising down the river I had all the time in the world.

Uh, have I told you that this particular day the temperature on the sun deck was 96.8F in old money? I had visions of going home in a bottle.

It took all of an hour to get connected and by then my new best friend Martina had departed to make the beds, leaving me with her laptop and its Slovenian keyboard; also its predictive spelling linked to a Slovenian dictionary. K a ka e n a m o r a – Slovenian, I think, for what a nightmare.

I decided to contact SJA gruppenführer Steven Downes to tell him I would not be able to file my my blog. After 20 minutes of hair-tearing typing, I had a message with Zs in virtually every word and I abandoned my email attempt.

I returned to my cabin a beaten man to find myself confronted by a stranger in the shower room, before I realised that the weirdo looking back at me from the full-length mirror was in fact me – burnt red apart from a white stripe down one side of my face where I had been bent forward trying to type on the unfriendly keyboard. From Slovenia with love.

I found solace in a challenge I had created for a fellow passenger called Klaus, a 70-something retired banker from Munich who is a football fanatic. We spent hours discussing – or, rather, arguing – the merits of great English and German players. It was the week of the passing of Germany’s 1954 World Cup winning captain Fritz Walter, who had been Klaus’s schoolboy hero.

I proposed that Klaus and I each select a post-war (yes, I did mention the war) team of our favourite German and England players to face each other in a fantasy football match.

These were our final line-ups, with the one rule that each player had to have played World Cup football and we could have five subs:

The morning after we had agreed on a draw and a penalty shoot-out (in which history demanded I concede defeat), I found a note pushed under my door from Eder, our Brazilian waiter. It read simply:

It was Brazil’s 1970 World Cup winning team. Neither Klaus nor I could put up an argument. Eder’s team would cruise home.

I WATCHED THE BBC’s Andy Murray documentary on my laptop in a wifi-linked coffee house in Cologne, one of the outstanding documentaries of the year.

Murray takes some terrible stick online, mainly from small-minded people who will not forgive his throwaway remark before the 2010 World Cup when he said he would want any team but England to win the title.

It was a typical Scottish jibe, and one you will hear from any true Scot proud of their heritage. As a Tottenham supporter, I know better than most that without the early Scottish influence the tradition of stylish along-the-ground passing football would not be cemented into the Spurs soul and spirit.

Murray is the greatest British tennis player of my lifetime – Fred Perry had taken out American citizenship by the time I arrived on this mortal coil.

Sue Barker’s beautifully narrated documentary revealed a warm, human side to Murray, and I hope on Sunday week he finally silences the non-achievers who keep putting him down by winning Wimbledon.

Yes, you’ve guessed it: I hope he cruises it.