News of Trevor’s tragic death in a fire had the effect of almost literally taking my breath away. 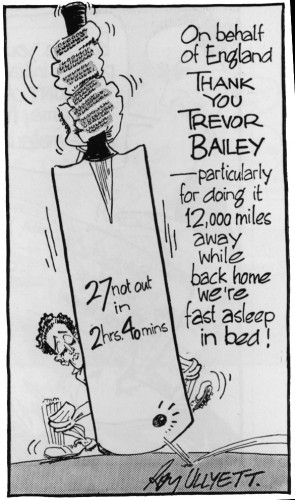 He died in his retirement flat in Westcliff just doors away from where I lived before ‘emigrating’ to dozy, delightful Dorset.

The last time I saw him was at the funeral of the great Daily Express sports cartoonist Roy Ullyett, another Westcliff resident and Trevor’s closest friend.

I delivered the eulogy and told the story of how Roy had mischievously done most to cement Trevor’s reputation as the Barnacle of cricket after one of the Bailey marathons during a Test Down Under. As Trevor said, “With friends like that, who needs enemies?”

Trevor told me at the wake that he and his wife were moving into a retirement flat in Crowstone Road, where I used to live and where he and Roy often visited when we were working together on a book for the Lord’s Taverners. “To think,” he said, “I will be retiring to a place down the road from where I was born. In 80 years I have managed to travel just half a mile.”

I am in shock at the manner of his death. He was one of my great cricket heroes when I was falling in love with sport in the 1940s. England has never had a more determined and dedicated competitor.

Trevor may have travelled only half a mile, but he moved a nation with his batting exploits. Rest easy, old friend.