NORMAN GILLER pays tribute to a football writer who was a match, in copy and person, for the very best 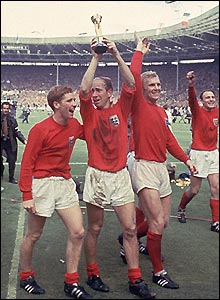 publication of Robin Daniels’ biography on Neville Cardus got me thinking as to which football writer could be mentioned in the same breath as the Manchester master. There is an obvious contender: Geoffrey Green, who was almost in the Cardus class for phrasing and painting a sporting picture with words. As a character, Geoffrey was out on his own.

A tall, willowy man who could have doubled for Peter O’Toole, Geoffrey closely followed in the Cardus footsteps as a journalist. Incredibly, both of these gifted chroniclers of 20th Century sport were educated at Shrewsbury School, Cardus nine years ahead of Green.

The school that gave us JC Thring Â¬ creator of the first rules for Association Football â€” also produced, arguably, the two finest writers on cricket and football in history.

It is fitting for me to write about Geoffrey at this time because this month marks the anniversary of his birth and death â€” born May 12, 1911, died May 9, 1990.

Geoffrey and I could not have been more different, he classically educated and with a vocabulary that might have been handed down to him from Mount Olympus; me an East End kid juggling as best he could with a limited supply of words. Yet somehow we managed to meet in the middle, and we became close friends when I was chief football reporter on the Daily Express, landing the job just about the same time in the mid-1960s that Geoffrey was at last allowed a byline in The Times after 20 years as the paper’s never identified “Association Football correspondent”.

But Geoffrey was far from anonymous because of his marvellously descriptive reporting for the Eamonn Andrews-anchored Sports Report on the BBC Light Programme, when his mellifluous, cut-glass accent balanced perfectly with Eamonn’s Dublin tones.

I would need a book to do justice to Geoffrey’s velvet-touch prose. Away from football reporting he was a noted poet and every word he wrote about the game was as beautifully weighted as a Bobby Charlton pass (Manchester United-mad Geoffrey and Bobby were almost joined at the hip).

Here are just a few examples of Greenisms:

Billy Wright tackling thin air as Ferenc Puskas sold him an outrageous dummy while shooting one of Hungary’s six goals at Wembley in 1953: “Wright charged in like a fire engine going in the wrong direction for the blaze.”

Describing Stanley Matthews: “It is by the power to call souls out of the abyss into life that greatness is judged. So can Matthews be judged … he is simply a superb artist.”

On Bobby Charlton: “He always possessed an elemental quality; jinking, changing feet and direction, turning gracefully on the ball or accelerating through a gap surrendered by a confused enemy.”

On Garrincha during the 1958 World Cup finals: “â€¦ the one man above all others to turn pumpkins into coaches and mice into men.”

And absolutely spot-on with his summary of England’s 1966 World Cup victory: “If England, perhaps, did not possess the greatest flair, they were the best prepared in the field, with the best temperament based on a functional plan.”

I could go on, but I want to switch to some anecdotes that explain why Green was out on his own as a character. He wore eccentricity like others wear clothes.

Let us remember that he spent much of his time nicely topped up with his favourite tipple of vodka and tonic.

I was once sitting alongside him in the press box at Southampton’s old home at The Dell, reporting on a match that boiled over into violence. Geoffrey seemed more, let’s say, relaxed than usual as he picked up his telephone and started to dictate his match report to The Times copytaker.

“Ding Dong Bell,” Geoffrey sang into the receiver, “Trouble at The Dell.”

I giggled to myself and wondered what the sub-editor would make of that rubbish as I switched my concentration to my own description of the match.

The next day I read Geoffrey’s report in The Times. His opening line was intact, and his version of events was not only poetic but captured completely what had gone on at The Dell. It put my piece in the Express in the shade.

An idea of Geoffrey’s extrovert personality can be gleaned from the fact that when a leg injury necessitated the use of a crutch, he attended an England match at Wembley with a stuffed parrot on his shoulder.

Another time, my then business partner Peter Lorenzo and I organised a testimonial dinner for Sir Alf Ramsey at London’s CafÃ© Royal to try to make up for the fact that the Football Association had kicked out England’s World Cup-winning manager with a tissue handshake.

Prime Minister Harold Wilson was the main speaker, and during the course of his speech a mouse ran the length of the top table. Its Speedy Gonzales sprint was cut off by Henry Cooper, who caught it in his hammer of a left fist.

Henry handed it to the chef, who in full view of everybody stamped on it. Wilson had no idea this was all going on, and as the audience roared, he thought his speech was going down a bomb.

How do you follow that? Only Geoffrey Green could. One of the most entertaining after-dinner speakers in the land, he was next to pay tribute to Sir Alf. He announced that he would now play the mouse organ. I have often wondered if he released the mouse so that he could use that joke.

He turned to Sir Alf and said: “As you are now out of work, perhaps you would like to join me in a street busking team?”

Geoffrey then produced a harmonica and proceeded to play Moon River. I don’t know who was the more surprised and amused, Sir Alf or the PM. It ranks with the funniest after-dinner speeches I have ever heard.

One final story from the many that made Geoffrey a walking, talking anecdote. During an England tour match in Poland, he and the equally eccentric and loveable Laurie Pignon (then on the Daily Sketch) were arrested for causing a disturbance in the centre of Katowice. This was in the pre-Solidarity days, and Geoffrey was making a sort of Hyde Park Corner speech extolling the virtues of a free society.

Laurie, the absolute epitome of the “terribly English” gentleman, who had been given an horrific time as a prisoner-of-war in Poland, was seconding Geoffrey’s argument.

Two guards in ankle-length, fur-lined winter coats appeared from out of nowhere and marched Geoffrey and Laurie away.

A few hours later, with their worried press colleagues on the point of calling in the British ambassador, the pair reappeared wearing broad, drunken grins and, would you believe, a fur-lined, ankle-length guardsman’s coat each.

Geoffrey continued to wear his coveted coat in the press boxes of the world right up to his retirement as the man from The Times. Dear old Laurie Pignon, always immaculately dressed, would not have deemed it proper wearing his coat in the Wimbledon press box in his role as the distinguished lawn tennis correspondent for the Daily Mail.

I would consider writing a biography of Geoffrey, apart from the fact that nobody could touch the book already written about him, his own autobiography Pardon Me for Living. Read it if you can, and study a word master at work. Geoffrey Green: Yes, you can mention him in the same breath as Cardus.