Just what does the FA truly stand for? NORMAN GILLER thinks he has an answer

The delays and intrigue surrounding the appointment of a chief executive at the Football Association and the on-going concerns about the organisation of England’s bid to host the World Cup in 2018 are nothing new. Nor does it need a UEFA think tank to come up with the conclusion that there are not enough professionals – which translates as people who know what theyâ€™re talking about – at the Football Association. This has been the mantra of generations of football reporters since Hungary humiliated us back in 1953.

I recall Denis Follows, then secretary of the FA and later knighted for his input to the organisation of the 1966 Word Cup, calling a press conference on an England tour. We travelling football reporters wondered what news was going to tumble from the lips of a man as sparing with his quotes as a miser with his money.

A civil servant who could have climbed out of the pages of a Yes Minister script, Follows had a face like thunder as he faced us. â€œIt has been drawn to my attention,â€ he said solemnly, â€œthat one of you has in this morningâ€™s papers referred to the Football Association as the English FA. We are the Football Association, the original, and have the unique title. I ask you to bear this in mind in future.â€ 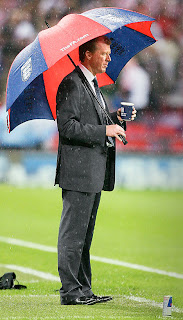 And that was it. As the pompous little man left the room leaving us stifling our laughter, Ken Montgomery â€“ droll Scot on the Sunday Mirror – said: â€œThat was about sweet fucking FA â€¦ forgive me, sweet English FA.â€

Follows had won a power struggle when Sir Stanley Rous, former top-flight referee, had moved on from secretary of the FA to all-powerful president of Fifa. Fleet Street campaigned for his job to go to England team manager Walter Winterbottom, but the blazered brigade ganged together and Follows got the vote. The same organisatin has since been responsible for passing over Brian Clough as England manager, yet appointing Graham Taylor and Steve McClaren. This week, they have appointed as chief executive someone who previously did work in Whitehall. Yes Minister here we come again.

The appointment of Follows to head the FA in the 1960s was a huge defeat for our football, and I made myself a small army of enemies by writing in the Express that our game was being run â€“ ruined even â€“ by great-grandfathers who knew FA about football.

I made my attack during a close-season tour across Europe when the organisation was shambolic, and there was a distinct “them and us” split between the officials and press (with the players on our side).

Typical of the disorganisation was when we arrived at an eastern European airport (it was, I think, Zagreb), and there was a 45-minute hold up while they counted the cases over and over again because they had one too many, which some clown had not labelled.

We members of the press gang stood at the airport bar, laughing like schoolchildren as the blazered old boys kept counting and shuffling bags. It was like a scene from a Marx Brothers film. Finally, after half a dozen attempts at counting, they got every member of the party to claim their case. And still there was one over.

I felt the heat rising on my face like the Red Sea when I realised that the case belonged to me.

anti-establishment story revolves around the Welsh Football Association, who could give the FA a close competition for which harbours the most unintended comedians.

The Wales squad for a 1960s match in East Germany gathered at London Airport. There were 10 blazered officials, manager Dave Bowen, trainer Jack Jones, eight pressmen and 10 players. It was the usual old story that some clubs were not releasing their players until the last minute, and it had been arranged for two other players to join the squad the next day, just a few hours before the kick-off.

The flight was called and there was the usual panic rush from the duty-free shop to the departure gate. This was in the days before passengers were allocated specific seats, and there was quite a bit of jockeying and jostling as the party filed on to the plane, with players trying to get with mates and officials trying to get as far away from the players as possible.

Finally, they were all seated with the exception of one veteran Welsh FA councillor, who was standing in the aisle looking lost. The flight had been overbooked by one.

After several minutes the airhostess announced that the last person named on the checking-in list would have to leave the plane and catch the next available flight. As they were going to East Germany during the Cold War, flights were not exactly frequent.

She read out the last name. â€œMr G Reece.” This, of course, was Gil Reece, one of the 10 players. “Would be Mr G Reece please leave the aircraft.â€

There was a long silence as the players waited for one of the officials to surrender his place so that Gil could stay on board. A couple of the officials fidgeted uncomfortably in their seats, and the old boy standing in the aisle tried to make himself invisible. Nobody moved.

Eventually, with a gesture of disgust and disbelief, Gil got up and walked off the plane. The rest of the players, who had been picked to represent their country in a prestige international, didnâ€™t know whether to laugh or cry as the plane took off with nine players.

After the flight had been under way for about half an hour, the head of the Welsh FA delegation approached the pressmen, who were gathered at the rear of the plane. They were expecting an explanation, or even perhaps an admission that it had been wrong to leave Gil Reece behind. They leaned forward, notebooks at the ready.

â€œI feel it only right that I should mention this, boys,â€ he said. â€œI thought one of you might have had the decency to volunteer to stay behind â€¦â€

My regular reader will know that I am self-publishing a book on the history of White Hart Lane: The Lane of Dreams, with help from Jimmy Greaves.

My plans have been knocked slightly sideways by the news that ace reporter Harry Harris, a mere boy when I was on the Express, is having his personal memories of the Lane published on Monday week: Down Memory Lane.

Anybody aware of Harry and his north London background will appreciate that he knows more about Spurs than any journalist walking this planet, so he is considerable opposition. His publishers, Green Umbrella, are treating him to a Mayfair launch and lunch. I cannot even afford a hot-dog stall promotion.

So to try to get in first I am going down the electronic publishing road. Watch this space if you are interested in more details. Iâ€™m on the case.