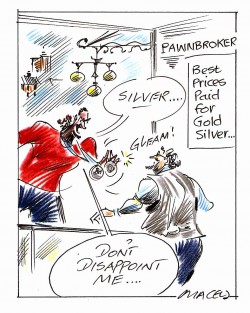 As the greatest sporting year of my 70-something life reaches its dying embers, let’s throw one more log on the fire and rekindle some off-beat memories, says NORMAN GILLER as he delivers his sporting quiz of 2012

It has been a year of great winners – from Wiggins to Mo and Bolt, Ennis to Phelps and Murray, Simmonds to Weir – but let’s not forget the losers. The unforgettable champions needed competitive motivation from exceptional challengers.

How well do you remember the runners-up of 2012, who in any other year could easily have been champions?

Which losers during 2012 said the following:

1. “I’ve got two silver medals behind the fastest man there has ever been. Why should I feel disappointed?”

2. “I have learned so much this year, being there right at the front of the race. Perhaps next year I will be the one in front, who knows? I don’t think I need to change teams to become a winner.”

3. “We thought we’d done it, then we hadn’t – it was crazy. You went from high to low in the space of about ten seconds. I just remember the gaffer telling us after the game: ‘Always remember how much this experience hurts and don’t let it happen again.’”

4. “I got a little complacent and he caught me. I was a little surprised when the referee stopped it. My mind was clear and my legs were OK. I respect the commission and the officials. Who knows? Maybe they made the right call.”

5. “I can’t believe that twice in one competition I’ve been disqualified and relegated. It’s unheard of. It’s a bit of a surprise, and it did knock my confidence a bit I must say. But I am so relieved it’s all over.”

6. “They completely outplayed us, and this Test showed just why they are the No 1 team in the world. Making it all worse was that this was Ricky’s last match. He is the greatest cricketer I’ve played with.”

7. “After I won my semi-final I thought: ‘This is my best chance’. Roger’s 30 now and he’s not bad for a 30-year-old! He played great for a man who has struggles with his back – he’s still got a lot of fight left and he deserved it.”

8. “You can’t compete on stride length. You saw how far he came back so, you know what, we’re not racing a fair race here, but I gave my best on a great night. But we have an issue here.”

9. “This has been the best year of my career even though I did not win the title. The championship was lost when Grosjean flew over my head at Spa, and when Vettel surprisingly only got a reprimand after qualifying in Japan.”

10. “My best jump was when Jessica Ennis was going past on her way to the heptathlon gold. So I just pretended I was British for about 30 seconds and fed off the crowd. I’m delighted for Greg. We are the best of pals.”

11. “The beef is over. Now we can eat in the same restaurants and go in the same nightclubs. After the fight we made up. On the night he was the better man and I drew the short straw.”

12. “I think about the Ryder Cup every day and try to work out what went wrong. How did we go from four points up at the start of the final day to losing? I guess Tiger’s 0-3 match record has to come into the equation, but you cannot blame an individual. This was a team failure and the buck stops with me.”

You need to get nine or more right to prove you know what you’re talking about when it comes to sports talk. The answers will be posted on this site on New Year’s Eve.

On behalf of all at the SJA website to members and welcome visitors, we hope you enjoy a 2013 that brings only good tidings and sporting performances and behaviour of the highest quality.