Sean Ingle, on Guardian Unlimited, reviews a week of inanities in the Wimbledon press conference room
Only one thing has disturbed the Federers and Henins of this world at Wimbledon this week: the insatiable quirky-story lust of the tabloid press pack. You see them waiting to pounce at every media conference, their questions not so much curveballs but boomerangs that fly halfway across the globe before fizzing back towards the unsuspecting player.

On Friday, after Justine Henin had crushed Elena Vesnina with a performance of class and guile, she was asked, in all seriousness: “Apart from tennis, do you have any special abilities or party tricks you’re able to pull out when you’re not on the court?”

No wonder Henin, who is fluent in several languages, skydives, and does plenty for charity, looked utterly flummoxed. She asked a translator to repeat the question in French. Seconds passed. She bit her lip and shrugged her shoulders, before finally saying: “I would love to sing well. That’s my frustration. I don’t cook that much. It’s not a big talent either.”

She wasn’t the only 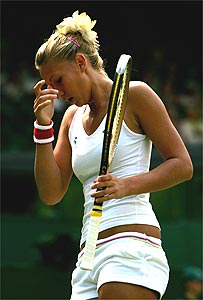 one to be lost for words. After Janko Tipsarevic’s thrilling victory over Fernando GonzÃ¡lez, he talked eloquently about civil war in the former Yugoslavia. And then he was asked by one hack: “Do you know what Tipsy means in English?” No? “It’s how you feel after having a drink. What’s your favourite drink?” You

can see the headlines now.

Roger Federer was not immune to this banality either. When probed about the introduction of Hawk-Eye, it was not to do with how technology might radically change the game or his dismissive comments at the Australian Open. It was about his picture on the giant TV screens. “Before you make the challenge there’s a picture of two players on the court. Yours was red and black and blurry,” asked the questioner. “It’s just not very flattering. Perhaps you could change the quality of the picture?” It’s not often you see Federer stumble, but he certainly did then.

Not once. Not twice. But 10 times out of a total of 12 questions. Gems included: “Can I ask you about your knickers?” and “I thought they were lovely and I’d quite like a pair, are you going to keep on wearing them?”

The Wimbledon press centre will always be a hotchpotch of journalists from across the globe, some eager to probe strategy and tactics, others – usually hacks on a sabbatical from the football season – obsessed by Brits and birds.

Some of this can be knockabout fun but you sense a chance is being missed. Tennis players are often effusive and more interesting than most sports stars. Many have things to say, often in two or three different languages. Andy Roddick has light-heartedly discussed world affairs and let us in on his side bets with opponents. But you cannot help inwardly cringing when Henin is asked “Have you played on Centre Court this year?” – a question any self-respecting hack could find out in 10 seconds.

It took a British player to put the press pack briefly in its place. When Jamie Murray was told by one reporter “You seemed to move quickly all the time”, he shot back: “Well, it’s better than moving slow.”

This is an extract from a blog entry on Guardian Unlimited. Read the article in full by clicking here

And what are the most cringe-inducing questions you have witnessed (or endured?) at a sports press conference. Post your comments in the box below