2012 commentary by Steven Downes
Just over 60 years ago, my grandfather took my then eight-year-old father on a bus ride through south London. It was standing room only on the lower deck of the red double-decker, and the passengers were bumped along as the 176 bus rolled past several bomb sites, evidence of the war’s nightly Blitz that Londoners had endured for almost six years.

Their destination was Herne Hill, and the first day of cycling action at the 1948 Olympics. My grandfather wanted to ensure that his son would share in the magic of the Games.

My father had his lunch, a single, simple cheese sandwich, wrapped in greaseproof paper, tucked into his school satchel. His father brought nothing to eat: such was the rationing even three years after the end of the Second World War, my grandfather often had to forego meals so that his son might eat.

By today’s standards, “Herne Hill Stadium” barely warranted such a description. As an Olympic venue in 1948, the cycling track was almost 50 years old.

The 1948 Games were the second time that London had come to the rescue of the Olympic movement. In 1908, the city stepped in late when Rome pulled out, and the Edwardian British sporting establishment helped to re-establish the dignity and credibility of the Olympics.

In 1948, with Europe weary and threadbare after the war, London made itself available, utilising its existing sporting infrastructure for the Olympic family to meet again, for the first time in 12 years. There were 59 nations represented in 1948, with total spending on the Games coming out at Â£600,000. By the end of it all, the organisers even turned a Â£20,000 profit.

“Improvisation was the theme,” recalled Harold Abrahams, famous as the Chariots of Fire 100 metres gold medallist from the 1924 Games and in later life a leading athletics official and the sport’s correspondent for the Sunday Times. So it was that dust from a brickworks was laid over the old dog track to turn Wembley Stadium into the venue for athletics. Nearby buildings from the 1924 Empire Exhibition were used for the press centre. Rowing was organised at the site of the annual Henley Royal Regatta. Gymnastics, originally intended to be staged outdoors, was forced into Wembley’s Empress Hall by the incessant rainstorms.

Athletes were housed in old army huts to the west of London, their daily meals supplemented by food parcels sent from around what remained of the Empire. These were, indeed, the “Austerity Games”.

Which is why 2012 represented such a fabulous opportunity for London – a chance, at last, to have a full period to prepare for the Games, a first real chance for London to stage a truly “Greatest Show on Earth”.

As Lord Coe, the chairman of LOCOG, the London organising committee, and his bid team realised, it was also an opportunity to transform British sport and a massive swathe of London. Six decades after the Second World War, there remains parts of London in which those old Blitz bomb sites remain overgrown and undeveloped.

even after a decade of Lottery-funded investment, is woeful: old Herne Hill Stadium remains, just, as one of only four velodromes in the whole country, only one of which has the benefit of a roof; Olympic city London has fewer 50-metre swimming pools than Warsaw in Poland or Nairobi, the capital of Kenya.

The facilities built for the 2012 Olympics will not redress those shortfalls, but they will help stimulate a sporting nation in a manner that Britain has never before had the chance to experience.

And then along came the credit crunch.

Instead of an Austerity Games, there is a real fear that we’ll be lumbered with the “Flat-Pack Games”. Building low-cost, “disposable” Olympic facilities carries all the short-sighted, penny-rich, pound-poor short-comings that you expect with collapsable tables and wardrobes made of chipboard and MDF.

It may come to that for the 2012 Olympics as ambitious plans are scaled down, economised or simply scrapped under pressure from those within the British media and Establishment who, plainly, loathe sport. Boris Johnson was elected to the London Mayor’s office on a platform of getting better value for Londoners from the legacy of the 2012 Games. The blustering rhetoric seemed to ignore the fact that the reason his predecessor, Ken Livingstone, had supported the project with such enthusiasm was because he was quick to realise that for Â£2.5 billion spending on the Olympics, he could get Â£5 billion-worth of investment to regenerate the “Thames Gateway” region to the east of London.

After Boris’s “whiff-waff” visits to Beijing, he is much more an enthusiast for the Olympics, despite the urgings of his “expert” adviser, Kate Hoey, the former Labour sports minister who continues to lobby against the London Games. An expensive consultants’ study of temporary venues, looking hard for cost savings, commissioned at the behest of Johnson and Hoey, has found that the plans in place for Greenwich Park and the O2 already represent “best value”.

But that appears overlooked by determined critics as mere detail. Coe, when embarking on his political career nearly 20 years ago, remarked that one of British sport’s biggest problems is that there is no effective â€œsports lobbyâ€ in the corridors of power at Westminster, as arts and other interest groups enjoy. Now, with Coe halfway on his epic journey towards delivering Londonâ€™s Olympics but in the midst of the worst global economic crisis in living memory, those other interest groups are beginning to band together in their criticism of the Games.

For Olympic critics, their easiest target is the “obscene” Â£9.3 billion budget. After all, argue anti-Olympic voices, how can anyone justify spending that amount on a mere two-week sportsfest?

No one can, of course. London miscalculated early on by not separating the budget for building the Games venues from the regeneration costs for the Thames Gateway. At least two-thirds of the proposed Olympic spend now has nothing to do with sport and is entirely about regenerating one of the poorest areas in the whole of Europe. 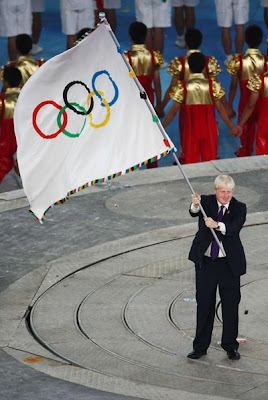 that is any concern among Boris’s many friends in the Hampstead literati set who look down at the Olympics.

Nor does Olympics Minister Tessa Jowell and her Whitehall mini-department do the Olympic project many favours by effectively releasing the same, finance-sensitive news more than once.

Agreement was announced before Christmas that the Government’s Olympic contingency fund would be called upon to seed finance the building of the Olympic Village, media centre and aquatics venue. Then, last week, the minister’s office re-announced that around Â£400 million was to be released for those projects, serving up to the critics as a new opportunity to snipe.

Among those critics is Simon Jenkins, a former editor of The Times and the Evening Standard. Jenkins, well-connected in political circles, was recently re-signed by the Standard to write weekly opinion columns. The London Games are sure to be in his cross-hairs. His newspaper carries much weight with the London electorate, as well as at City Hall and Westminster, and is certain to increase pressure on LOCOG to downgrade their plans for the Games.

But two other pieces of news last week may just help to redress the balance in the propaganda battle. The London Olympics has already created some unlikely bedfellows, but none can compare with a former KGB agent and the advertising agency that helped Margaret Thatcher become prime minister.

Last Wednesday, billionaire Russian oligarch and former spy Alexander Lebedev bought the Standard for Â£1. On Thursday, advertising titan Saatchi & Saatchi was reported as having been given the account to manage London’s branding, image and advertising through to 2012.

It is too early to judge what impact Saatchi & Saatchi may have – but it is sure to be slick and inspiring. After all, the firm did well managing to create and maintain the image of Margaret Thatcher.

And the traditionally Olympic critical Standard offered some upbeat coverage of the Games as Lebedev took over.

“London Olympics will provide a lasting legacy”; “Coe: We were absolutely right to bid”; and “Sainsbury’s chief: I’ll get Olympics right for spectators” are among the recent headlines under the new owner from Russia.

I just hope that, in three years’ time, I can show to my sons the magic and excitement of what living in an Olympic city can be like. And, unlike my grandfather and father, we won’t have to see it done on a make-do-and-mend basis.

This is an edited version of a column which was first published by AroundtheRings.com. The views are those of the author and in no way represent the position or policy of the Sports Journalists’ Association.