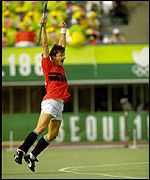 to a World Cup staged in London and an England team’s finest couple of hours
On Sunday October 19, 1986, 16 hockey players from England lined up to receive their medals after playing in a World Cup final staged in north London.

The medals were silvers. For many sportsmen, finishing in only second place would be regarded as failure. But for the England squad that finished behind only a truly great Australian side, this was a triumph that captured the imagination of the whole country.

By the last day of the Cup the England team were hailed as heroes, with their exploits followed on television by people who had thought hockey was only played by schoolgirls. Ian Taylor and Sean Kerly, pictured, were cult figures on newspaper sports desks throughout the country.

Against all the odds, England had won a medal in competition with the world’s best. This was the one and only time in a World Cup that England’s men had reached the semi-finals. For a collection of schoolteachers, computer specialists, bankers, an ex-police officer who became a newsagent to make more time for hockey, a surveyor, a sports goods sales manager, a transport manger and a recently qualified doctor, they were true amateurs who had given so much to achieve their success.

The London World Cup had been a success story from start to finish. The first World Cup to be played on artificial grass, although plastic pitches had been part of the Olympics since Montreal 10 years earlier, the success of the England side had ensured that tickets sales increased daily, press coverage increased throughout the tournament, as did radio and television coverage. Even the demise at Willesden of the previously all-conquering Asian nations had no noticeable effect on attendances.

Full house notices went up and ticket touts were active. Missing were the sporting agents, with promises of trust funds, lucrative endorsements with visions of limitless wealth. Nevertheless, most of the squad were to go on two years later to win, the ultimate, Olympic gold in Seoul.

Details of England’s perfect start with a 3-1 victory against New Zealand and the build up to the final have now been consigned to the sporting history books. But what has become of those 16 heroes?

Happily, the majority are still involved in hockey today, 20 years on. Richard Leman and Jon Potter are members of the England Hockey Board and Leman is very involved with his own club, East Grinstead. Martyn Grimley and John Shaw are now coaching their clubs, Brooklands and Southgate, while David Faulkner, after a lengthy involvement with his club, Havant, is now England Hockey’s and the Great Britain Performance Director.

Norman Hughes is European Hockey’s Development Manager while John Hurst and Kulbir Bahra are still very involved with the game in their Sports Goods projects, with John also extremely active with goalkeeper coaching at international level.

Sean Kerly and Richard Dodds, now an orthopedic consultant, can still be found on the hockey field: Sean was for a time the Players’ Representative on the International Hockey Federation’s executive board.

Steve Batchelor is coaching hockey and tennis at Cranleigh School whilst Paul Bolland is still scoring goals for St Albans in the Slazenger National League.

Sadly, the 1986 World Cup success did not signal the start of a new era for hockey in Britain. Several of the successes of 1986 are now in the driving seats as British hockey looks towards 2012. We must not miss another opportunity.