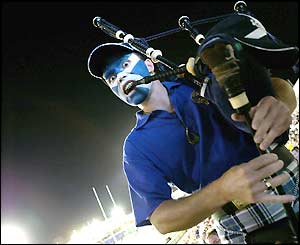 his Daily Telegraph column, tempers his countrymen’s enthusiasm for the visit to Twickenham

You can almost hear the grappling irons scratching for purchase on the stonework of Hadrian’s Wall. Kilts have been pressed and sporrans crammed with money, toothbrush, return ticket and whatever other accoutrements are deemed necessary for a rugby weekend with the lads. Beware all ye southerners, the Highlanders are gathering in preparation for their biennial march south with hope in their hearts (which is nothing unusual) and the Calcutta Cup in their possession (which is more than unusual).

Still rejoicing in last season’s 18-12 humiliation/annihilation of the accursed auld enemy, seldom have the clans headed for Fortress Twickenham with a greater sense of optimism. England, the so-called world champions, have been in disarray, sacking coaches, losing to Argentina, South Africa and New Zealand, whereas mighty Scotland have been humping Romania and the Pacific Islanders. It was 1982-83 the last time the Scots enjoyed successive victories over the Sassanachs, history beckons.

Alas, it pains me to say it but Twickers has not exactly been the field of dreams to Scotland in recent times. Did I say “recent times?” Make that the last seven decades

during which we have managed just two victories on English soil.

The last time I shared a jar or two with Gordon Brown, whose death from cancer in 2001 deprived Scottish rugby its greatest lock forward and funniest spinner of yarns, he was quick to remind me that he had been let loose on England eight times, emerging victorious on six occasions, most notably the emotional 16-15 triumph of 1971.

“Och, aye. Aye, that was the moment of moments, alright, because Twickenham had traditionally represented Scotland’s sporting Culloden,” recalled “Broon frae Troon”. “Just walking down the tunnel behind my big brother Peter â€“ who was captain â€“ was a special feeling. Also, they were naming the British Lions party for the tour of New Zealand on the Sunday morning and it was between me and Nigel Horton, my direct opponent in the England scrum. We had a running battle from start to finish…he made me do all these terrible things to him.”

More on the Six Nations: Andrew gives SJA his insight on Wilkinsonâ€™s return